Anyone who purchases Gareth Evans’ cult hit The Raid (2011) on either DVD or Blu-ray expecting a philosophical mediation on the morality of violence and not 90 minutes of bullets, brawls and broken necks is heading for an evening of tears and disappointment. The plot is wafer-thin, the script anorexic. By the time the credits roll you will not have learnt any valuable life lessons nor will you feel emotionally enriched. What The Raid is, however, is a modern take on old-fashioned, bubblegum cinema – fast, furious and ultra-violent.

Rookie cop Rama (Iko Uwais) is a member of a crack team of Indonesian police officers who embark on a dawn raid of a dilapidated tower block run by cartoon-crazy crime boss Tama (Ray Sahetapy) and his two henchman, Mad Dog (Yayan Ruhian) and Andi (Donny Alamsyah). Things go wrong, most of the officers get wiped out within the opening salvo and it’s then down to Rama and a few of his surviving colleagues to take down Tama and his seemingly endless supply of weapon-wielding goons. 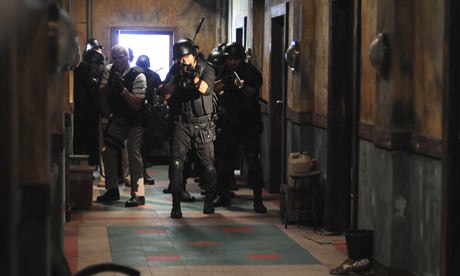 If you caught Pete Travis’ Dredd 3D (2012) at the cinemas recently, the chances are all of the above will sound more than familiar. Both the Judge and Rama have to fight their way up through high-rise hell, and both directors liberally utilise super slow-motion cinematography for effect. Apparently, the similarities are coincidental, but it’s difficult not to compare the two. Ultimately, it’s The Raid which comes out on top due to its inventive action sequences and creative camerawork.

The violence that Evans serves up throughout is especially brutal, hyper-real and over-the-top, and there are still a few moments that only hardened gore fans will be able to stomach. The fight scenes are similarly well-choreographed, but a couple of set pieces do drag slightly and become a little repetitive – despite the best efforts of Uwais, who impresses as the indestructible super cop.

Narrative underdevelopment aside (whether intentional or non-intentional), The Raid is mindless, pointless, unmemorable yet also hugely entertaining and enjoyable while it lasts. Welsh filmmaker Evans clearly has genuine visual flair, and it will be extremely interesting to see what direction he decides to take with his upcoming sequel to The Raid – entitled Berandal (2013) at this stage – whether rehash or reinvention.