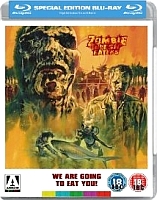 ★★★★☆ Rising from the grave once again for a stunning new high definition restoration courtesy of Arrow Video, Italian director Lucio Fulci’s 1979 spaghetti horror classic Zombie Flesh Eaters (Zombi 2) may finally get some time in the goresploitation sun after spending so many decades in the Romero-cast shade. Offering Continue Reading

★★★☆☆ Paul Smith: Gentleman Designer (2011) is, much like the clothing offered up by this iconic British label, a bit on the flashy side. This 55-minute TV documentary by Stéphane Carroll – which follows Smith himself as he goes about the everyday business as head of his trendy design house Continue Reading

★★★☆☆ Michael Moore’s Fahrenheit 9/11 (2004) worked to bring the incessant ramblings of conspiracy theorists to the forefront of both the political and media mainstream, with its fast-paced, highly charged, wholly fresh brand of documentary. Following in hot pursuit was Robert Kenner’s 2008 effort Food Inc.  which encouraged a new Continue Reading

Philadelphian filmmaker Jesse Vile will be hoping that the UK cinematic release of his debut documentary Jason Becker: Not Dead Yet (2012) on 16 November, followed closely by its DVD release on 3 December courtesy of Dogwoof Films, will inspire viewers and raise awareness of the film’s extraordinary subject and Continue Reading

★★★★☆ This year has already seen its fair share of complex, unforgettable real-life figures to receive the documentary treatment, and Jesse Vile’s Jason Becker: Not Dead Yet (2012) is no exception, in a film which manages to be simultaneously heart-breaking and inspiring. Becker was someone who lived and breathed his Continue Reading

★★★☆☆ Step Up 4: Miami Heat (Step Up Revolution, 2012) is the fourth film in the successful Step Up film franchise. It is produced by the third film’s director, Jon Chu and directed by Scott Spreer. This time, the familiar romance vs. social calibre storyline is transported to Miami, with Continue Reading

★★☆☆☆ Matt Damon will be glad to have escaped from the Bourne franchise after its apparent heart-pounding, globe-trotting finale Ultimatum back in 2007. Damon said himself that he felt the ideas of identity and amnesia had been excavated in the trilogy. The writer of the first three instalments, Tony Gilroy, takes the Continue Reading

★★★★☆ Currently sitting pretty as the second highest grossing film of the year (behind arch rival, Marvel’s Avengers Assemble), British director Christopher Nolan’s third and final entry in his DC Batman trilogy, The Dark Knight Rises (2012), certainly carries a great deal of conviction. Following on from the overt theatricality Continue Reading