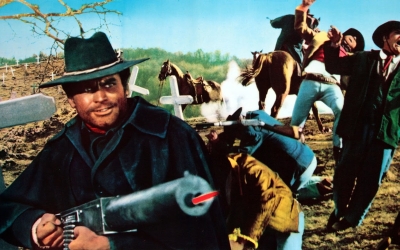 ★★★☆☆ Those who simply can’t wait for Hollywood renegade (and ‘butt shut-downer’) Quentin Tarantino’s Django Unchained (2012) to hit cinemas later this week – or baulk at the bladder-straining runtime – need fear not. They can now get their fix of the iconic, if somewhat changeable gunslinger with the first Continue Reading

★★★☆☆ Having been released in its home country of Japan all the way back in 2007, The Foreign Duck, The Native Duck and God in a Coin Locker has finally reached British shores thanks to its DVD release courtesy of Third Window Films. Directed by Yoshihiro Nakamura (best known in Continue Reading

★★★★☆ The power of the lens to deconstruct colonial history is a primary concern in Miguel Gomes’ third feature, Tabu (2012). Partitioned by two distinctive halves, it’s a mesmeric example of how to unravel filmic modes without clogging up the narrative. The first section is set in modern day Lisbon Continue Reading

★★☆☆☆ Brazilian director Fernando Meirelles first came to the attention of the wider cinemagoing public with 2002’s City of God, a wildly successful tale of gangsters in the slums of Rio. His follow-up adaptation of John le Carré’s The Constant Gardener (2005) was similarly well received but 2008’s Blindness was Continue Reading

★★☆☆☆ It would be fair to say that Australian director John Hillcoat’s previously released feature, The Road (2009), had minimal action. His dour adaptation of Cormac McCarthy’s post-apocalyptic thriller played down the drama and focused heavily (arguably far too much) on anxious, pensive walking. Perhaps that’s why his latest film Continue Reading