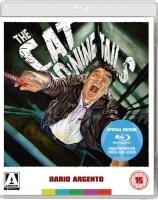 ★★☆☆☆ In only his second film as director after The Bird with the Crystal Plumage (1970), Dario Argento was determined to demonstrate new facets of his talent, enthusing that The Cat O’ Nine Tails (1971) – starring James Franciscus, Karl Malden and Catherine Spaak – would be a different beast Continue Reading

★★★☆☆ Beginning with a lengthy disclaimer distancing itself from the evidently non-plussed Stanley Kubrick estate, Rodney Ascher’s theory-laden docu-essay Room 237 (2012) falls somewhere between the redundant and the reverential. Offering up a series of curious readings into Kubrick’s 1980 horror classic, The Shining – ranging from the coercive to Continue Reading

★☆☆☆☆ There’s hardly much more to say about Neanderthal martial arts movie The Man with the Iron Fists (2012) other than it is an affront to the defining contributions made by directors such as Ang Lee and Wilson Yip over the years. This deeply cerebral genre has been completely macerated Continue Reading

★★★☆☆ With a love of Ealing comedies worn proudly on its sleeve, British caper 12 in a Box (2007) arrives on DVD this week following a limited theatrical run back in March. Although it’s taken a little longer than anticipated to reach the stage of public consumption since its completion, Continue Reading

★★★★☆ Some films, though hard to watch, make enlightening viewing. Vito (2011), the new biographic documentary by director Jeffrey Schwarz about the American film journalist and gay activist Vito Russo, is one such exercise. The film charts Russo’s life from his childhood in New Jersey to his role as one Continue Reading