For those who caught James Cameron’s Avatar (2009) during the film’s cinematic release, this was most likely the first thought to have entered your warped minds as you left the local multiplex/IMAX. Now released for the small screen on 2D formats DVD and Blu-ray, the world of Pandora is still unlike anything you will have seen before. Pandora’s exotic flora and fauna are just as impressive as they were on the big screen; the film’s flying creatures still appear dynamic and life-like as they dive towards their prey; hard-bitten space marines in enormous walkers still leave you with a sense of awe as they weave in and out of the jungle’s immense foliage.

Avatar’s technological advances involve the integration of computer-generated elements with 3D camera photography. Shooting 3D is inherently time-consuming and difficult because everything is shot with two cameras; the two images are then merged to provide a more ’rounded’, photo-realistic picture. The difficulty here lies in the fact that Cameron is shooting computer-generated backgrounds and characters – most of which would normally be added at significant cost to the original live-action image. 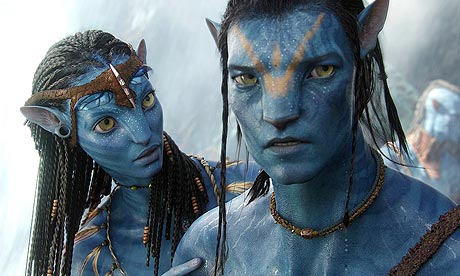 With such a huge focus placed upon the film’s unique aesthetics, other aspects inevitably suffer. Avatar’s plot is one we have seen recycled a hundred times before; the story of an invader (Marine Jake Sully, played by Australian newcomer Sam Worthington) embracing the culture he once sought to destroy is essentially Pocahontas retold (or ‘Smurphahontas’ as many have labelled it). However, the film’s overpowering visuals soften the blow; if Avatar has one flaw it is the crow barred in grandiose, overwhelming, clunky concepts that are given weight they cannot support.

The Holy Grail for the human invaders is Pandora’s rare metal ore, Unobtainium. Yet this is never more than a name – we know too little about it; it is merely (as we are told) valuable to ‘someone’, ‘somewhere’. The world of the film is chock-full of similarly unwieldy, pervasive mythic concepts that ultimately feel insubstantial. This is really the ‘make-or-break’ point for any fantasy film – the originality of the paradigms and forces that shape its unique ‘cosmos’ and can really create that epic, overwhelming feeling. Unfortunately Cameron’s efforts in Avatar cannot compete with the ‘Force’ in George Lucas’ Star Wars cycle – a concept so appealing and mysterious that it supersedes its own foundation, breaking out of the confinements of cinema and into everyday culture.

Any plot holes or insufficiency, however, are quickly forgotten as you sink further into Cameron’s visually breathtaking world and enjoy the heroics, typical hard-bitten dialogue and all-out chaos of the film’s final battle. Whether it’s viewed in 2D or 3D, Avatar represents a landmark in technical innovation and is worthy of being seen just for the sheer spectacle.