In the aftermath of the announced abolition of the UK Film Council by the UK Coalition government, much has been made on how this will directly affect the country’s ability to firstly support its home ground talent, and secondly, the UK film industry’s capacity for competing with its European neighbours and Hollywood.

Whilst many notable directors and performers have berated the decision, others have taken the opportunity to highlight the quango’s failings, speaking out against the Council’s bureaucracy, perceived biased towards “safe pictures” and their preference for backing multi-national efforts rather than true British productions.

Neil Marshall’s latest visceral offering, Centurion (2010), will now go down in history as one of the final films to “benefit” from the organization’s funding, and arguably one of its most Brit-centric. Shot on location in the forests of Hampshire, Surrey and the Highlands and also at a number of the UK’s best studios including Ealing and Shepperton, Marshall’s cinematography perfectly encapsulates the snow covered forests and barren, wolf-invested plains of Iron Age Britain, at times grittily realist whilst at others appearing truly fantastical and unearthly. Credit should primarily go to Marshall for capturing such vistas so in contrast with the dark, dank scenes of both claustrophobic The Descent (2005) and the disappointing Doomsday (2008). However, the UK Film Council also deserves commendation for its “tax break” scheme, encouraging filmmakers to utilize some of the UK’s most iconic locations and facilities before those overseas.

Centurion follows the exploits of the legendary Ninth Legion, the finest fighting force in the entire Roman Empire, as they march northwards into Caledonia to defeat the native “Picts” and their guerrilla army. The legion is soon decimated by the cunning tactics of their barbarian foe, with only a handful of warriors remaining to rescue their abducted General Virilus (The Wire’s Dominic West). Marshall has enjoyed a growing reputation within the UK film industry and has been able to secure some of the best British acting talent available to takes up the roles of his surviving legionaries. 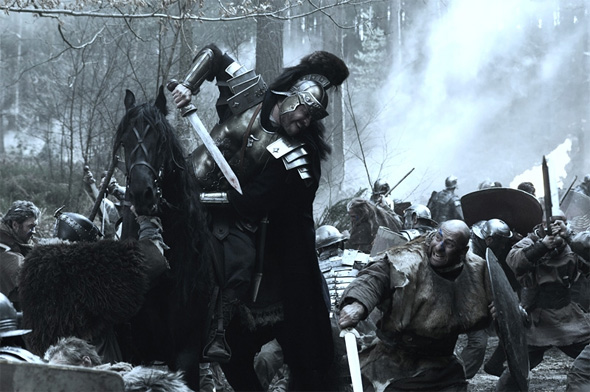 Unwillingly lead by the always excellent Michael Fassbender (no stranger to UK audiences after his turns in Hunger [2008] and Fish Tank [2009]) as Quintus Dias, the motley crew also plays host to actor/director Noel Clarke, David Morrissey and Four Lions (2010) star Riz Ahmed. Marshall himself has been quick to quash any talk of analogies between Centurion’s invading force vs. local populace narrative dynamic and the US/UK occupation of Afghanistan and Iraq. However, it ultimately becomes near impossible to dismiss the Roman’s boisterous camaraderie and condescension towards their light-footed, near-fanatical Pict foes as anything other than socio-political commentary.

Were it not for the higher production values and period setting, Centurion would at points almost perfectly mimic Marshall’s earlier werewolf-flic Dog Soldiers (2002). Here, Marshall also portrayed a tightly-nit, elite military force facing off against an unknown number of relentless, bloodthirsty pursuers. That’s not to say that Marshall portrays his mysterious Picts as simply bestial killing-machines. The casting of Bond-girl Olga Kurylenko as the assassin/tracker Etain and Ulrich Thomsen (still best known for his phenomenal turn as Christian in Thomas Vinterberg’s Festen [1998]) as the Pict’s leader Gorlacon help to add a sense of context, and importantly humanity to the actions of the film’s main antagonists.

There is an unfortunate, clumsy attempt by the director to tag on a Roman/Pict love subplot towards the end of the film, but Marshall more than makes up for this through his fantastic ability to capture the visceral, lighting-quick nature of brutal hand to hand combat, at times filling the screen with enough bodily fluid and scenes of dismemberment to satisfy even the hungriest gore-hound.

Centurion’s true strength lies in Marshall’s ability to play on both his, and UK film’s strengths. Performances are engaging and refreshingly comic throughout; the action sequences are short, tight and impactful (mercifully rejecting the overuse of CGI to swell numbers); and finally, it is realistic about the size and makeup of its target audience – the film was released to download in the UK via Xbox Live on 30th July 2010, over two weeks before its DVD release.