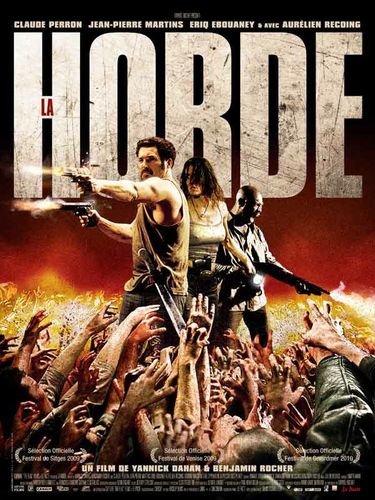 After a number of years of low grade obscurity, the mid-2000s saw somewhat of a resurgent return to form for zombie-kind, thanks in no small part to the rage infected, sprinting killing machines of Danny Boyle’s 28 Days Later (2002), and Spaced co-creator Edgar Wright’s rom-zom-com Shaun of the Dead (2004). Nearly every conceivable setting and scenario has been worked, re-worked and then re-re-worked to within an inch of breaking point, so what hope can The Horde (2009), a low budget French zombie-flick, have of standing out in such a tired, overcrowded horror sub-genre?

The Horde follows a team of corrupt, vengeful French cops on their mission to exterminate a group of ruthless gangsters responsible for the death of a former colleague. Headed up by the bear-like Ouessem (Jean-Pierre Martins), the death-squad manage to infiltrate the gang’s lair – a derelict apartment block within the decaying suburbs of North Paris – but are quickly overpowered by their mobster opposition, lead by Nigerian kingpin Adewale (Eriq Ebouaney). Meanwhile, outside, an unknown occurrence is turning the Parisian population into a hoard of homicidal flesh-eaters who begin to ascend the building in search of human flesh. But can the two opposing factions put aside their differences in order to escape certain death, or will mutual hatred and distrust lead to their collective destruction… 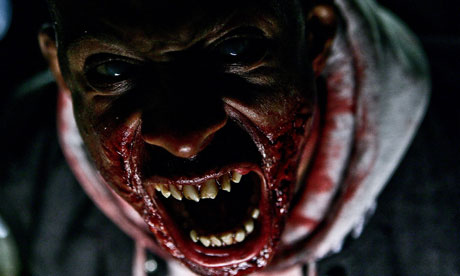 In regards to originality, first impressions are not particularly encouraging. The Horde presents its audience with a number of typical, formulaic zombie film tropes; a group of contrasting, highly-pressurised survivors; a derelict building that quickly shifts from being the last available safe refuge to a concrete tomb; and most importantly, countless, evermore elaborate scenes of zombie decapitation, evisceration and immolation. We’ve clearly seen this all before.

However, it gradually becomes clear that directors Yannick Dahan and Benjamin Rocher have spent a great deal of time and effort in correctly planning and choreographing a number of the film’s more impressive, gory set pieces. Highlights include a fridge-related zombie offing, an undead massacre with an un-mounted, high calibre machine gun and some of the most enjoyable survivor vs. flesh-eater hand to hand combat seen since Ken Foree decided against taking the easy way out of a tight squeeze in Romero’s original Dawn of the Dead (1978). The fast-paced camerawork of the film’s action sequences also add an extra layer of physicality, with bone to bone impacts shaking the audience’s viewpoint, evoking the kind of wincing nausea towards the exertion of extreme force upon the human body I felt when first watching the infamous fire extinguisher scene in Gaspar Noé’s nightmarish Irreversible (2002).

Whilst falling well short of even beginning to reinvent the flesh-eating wheel, Dahan and Rocher’s The Horde is for the most part a competently made, high octane, and, importantly, enjoyable French take on the zombie genre. For a more innovative approach to teaching this particular cinematic ‘old dog’ a few new tricks, I urge you to go out and grab a copy of the fantastically inventive 2009 Canadian horror Pontypool.