On Saturday, CineVue was honoured to be invited along to the latest event from Secret Cinema, “The Pioneer of Live Cinema”. For those uninitiated in the Secret Cinema experience, every few months the 60,000 strong (and rapidly growing) army of Secret Cinema devotees are invited to watch an unnamed film, at an undisclosed – yet relevant – location, putting complete trust in both the artistic taste and organizational expertise of the event’s hosts.

Their aim is simple – to build an elaborate, interactive event around a screening, giving guests the opportunity to physically step into the world of the chosen film for one unforgettable evening. Past events have included a screening of Lindsay Anderson’s If (1968) at Dulwich College (with guests registered by a headmaster before entering the school) and the complete recreation of a bustling, futuristic metropolis in the centre of London’s Canary Wharf, in conjunction with a special screening of Ridley Scott’s sci-fi classic Blade Runner (1984). 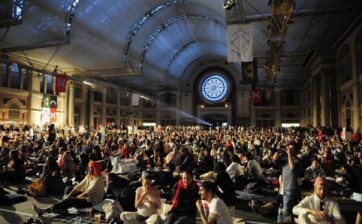 So at 4pm, on Saturday 4th September, I arrived at Alexandra Palace Rail Station armed with nothing more than the “recommended” cushion and Bedouin ceremonial address suggested by Secret Cinema’s sporadic Twitter and Facebook posts. As we approached Alexandra Palace, past a number of Bedouin tents full of period items to barter for, we were met by a band of mounted Arab soldiers – rapiers in hand – rallying the amassing crowd before guiding them across the park towards the palace, much to the annoyance of a number of World War I era British soldiers.

Upon entering, it was revealed that the entire interior of Alexandra Palace had been transformed in adherence to the as yet unnamed film’s theme. British officers typed busily away at desks on out-dated typewriters, whilst through another door an enormous labyrinth of market stalls had been erected, selling anything from Arabic scriptures and head scarves to fresh olives and lamb koftas.

The introduction of Secret Cinema’s 11th film was nothing short of breathtaking. Parading along the hall’s cleared walkways, atop a remarkably well-behaved camel and trailed by a procession of both Arabs and British infantrymen, sat a Christ-like figure draped in white Bedouin robes. As the man made his approach, the fanatical flag-bearers started up a new chant; “‘Lawrence! Lawrence!”… and with these cries, Secret Cinema’s latest film choice was revealed as David Lean’s 1962 epic, Lawrence of Arabia.

Flawed execution aside, Secret Cinema should take heart from being able to host three large, overall successful events. Their ability to offer cinephiles the opportunity to live out their favourite film, before sitting down to watch it in all its big-screen, 35mm projected glory is, at this moment in time, unrivalled. Here’s hoping that the next Secret Cinema event will be a screening of Carol Reed’s 1949 noir classic The Third Man in an abandoned sewage works, complete with a few thousand undercover secret agents all trying to find the elusive Harry Lime…

For more details, go to http://www.secretcinema.org/.