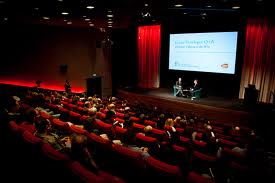 Compared to the age of the film industry – who would by now be knee-deep in birthday cards from Her Majesty – the video games industry has barely made it out of its spotty, gangly teenage phase. This hasn’t, however, stopped a growing confluence between these two powerhouses of visual entertainment over the past several decades. It’s an overlap that has shown no signs of letting up, either.

As the technology behind the games has progressed, so too has the ability of developers to create more and more immersive worlds in which to captivate their players. While back in the 1980’s, the soundtrack to your favourite 8-Bit, 2D plat-former consisted of little more than four MIDI tracks – one of which had to be saved for sound effects – the flagship titles of today’s most competitive consoles boast the type of symphonic orchestral scores that tip a kindly nod to the likes of John Williams.

As the industry marches ever closer to the photo-realistic visuals that were, just two decades ago, reserved for the holo-deck of the Starship Enterprise, the ability of game developers and designers to bring more of the big screen to the relatively small TV in your front room has sky-rocketed. Part of this growing cohesion in the industry might be cynically touted as little more than profiteering – as each block-buster release is now almost guaranteed to be flanked on at least one side by the video game tie-in. Sure, tactics such as this live not far from the McDonald’s Happy Meal style of mercenary merchandise cash-in, but that says nothing of the growing number of games which can name no silver-screen counterpart.

There is, by contrast, a growing effort among the more scrupulous denizens of the video games industry to bring to their players an experience that is truly cinematic. To do this, they are no longer looking among their own ranks for the tools to get the job done, they’re enlisting the help of folks in Hollywood to create that which it understands best. While at one time, video games afforded a serious actor about as much prestige as an advertising deal with Asda, the modern games industry is garnered with near-equal respect to its lime-lit brethren.

It’s not just the American film industry that’s treating the gaming business with a new found warmth, either. On this side of the pond we have our own filmmakers lining up to get on board with the latest games; a good example of which is about to hit the shelves. October 6th will see the release of Enslaved: Odyssey to the West; a brand new title from British game developers Ninja Theory. Drawing on a style established in their previous title, Heavenly Sword, Ninja Theory are one of those aforementioned number whose modus operandi is – this from Chief Design Ninja, Tameem Antonaides – to make their game “feel like a movie”. 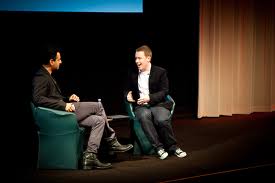 In the first of a series of forth-coming lectures hosted by BAFTA that aim to build bridges with the gaming industry, Antonaides was given a chance to explain how he and his team had resolved to achieve their goal. Slipping behind the scenes, the audience was given a unique insight into the process of game development, which along the way threw up a number of familiar names.

In order to create that intended cinematic gloss, Ninja Theory had enlisted motion capture legend Andy Serkis to realise the plot’s main character, Monkey. Serkis made his name in mo-cap as Gollum in Peter Jackson’s epic The Lord of the Rings trilogy, going on to demonstrate formidable versatility in the field as the titular giant ape in Jackson’s subsequent feature, King Kong (2005). The guys at Ninja Theory didn’t stop there, though. A screen icon like Serkis would merely be a diamond in the rough if thy didn’t have a solid script for him to work with. Enter Alex Garland. Having worked on a number of highly successful pictures, such as Danny Boyle’s 28 Days Later (2002) and the screen adaptation of Kazuo Ishiguro’s heart-breaking novel, Never Let Me Go (2010) – a hot tip for some serious gongs in the coming year – Garland was enlisted to lend his pedigree to the script for Ninja Theory’s ambitious project. Finally, a generous handful of harmonious garnish came in the form of celebrated composer and musician Nitin Sawhney, who was brought on to create the soundtrack.

With a good helping of locally sourced ingredients, Ninja Theory had given themselves the best possible shot at creating that cinematic stir they’d been hoping for… but did they pull it off? Well, it just so happens that the seminar was followed by an informal mingling of audience members and industry-types that tendered an opportunity to have a go at the finished game. A twenty minute plough through the opening levels of the game returned a favourable verdict. The soundtrack was the most immediate treat; deftly sculpting a spacious and vibrant atmosphere over the opening sequence. 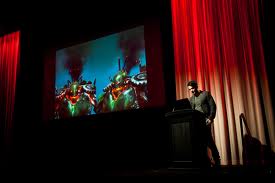 It wasn’t long before other little touches begun sliding into the mix. Serkis’ painstakingly mo-capped expressions spread across his digital avatar’s face with an eerie familiarity as he introduced us to the bold and cantankerous character. The camera, which typically clings onto the shoulders of your on-screen player like a jockey on a run-away horse, is given an unusual freedom as it plays with intriguing angles that work not merely as a mechanism for playing the game but also tells the story. While the opportunity to see Garland’s screenplay unfold was limited, what could be glimpsed in my relatively brief test was a product that approached the quality and veneer of a substantially budgeted feature film; a video game that manages to deliver on a number of artistic fronts, which, while relatively superlative to the core mechanics of game-play, are crucial to the overall experience.

While a number of video games have seen their plots and characters co-opted for the silver screen over the last decade – notably the Resident Evil Franchise – it might be safe to assume that Ninja Theory aren’t hoping for a movie adaptation of Enslaved: Odyssey to the West, confident that they’ve already delivered the experience for their gaming audience.