Over the past few years, the film parody has made a somewhat inconsistent return to cinemas. Whilst some have provided laughs, many (including the …Movie films of the Wayans Bros.) have provided only headaches after excessive pondering over just how they got into production (one word: profitability). Unfortunately, for anyone who has pre-ordered or bought Kevin Hamedani’s zombie flick, ZMD: Zombies of Mass Destruction (2009) falls into the latter category.

Setting out to parody the already overdone zombie genre, ZMD never quite achieves its goal and instead provides an hour and a half of bad acting, awful effects and even worse clichés. Although the inclusion of such atrocities usually adds to the enjoyment of such spoofs, ZMD ultimately fails to produce any laughs whatsoever. 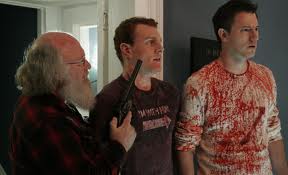 All the usual stereotypes are alive and kicking in the small town of Port Gamble, but all fail to breathe life into the film. Instead they meld to create a clunky and rather boring amalgamation that joins lifelessly with the zombies that tear their way through the town. Although no parody is ever expected to be outstandingly original (something that will always allude a film mocking another), the inclusion of the gay couple, the Muslim family, the environmentalists and the God-fearing reverend all make for a rather crowded film that falters when combined with its lame, hackneyed script. Instead of ridiculing such clichés, it only succeeds in tiring them further.

Billed as a ‘political zomedy’, ZMD sadly features neither politics or comedy. The repeated mention of terrorism is laboured (its simplistic jibes at Islam lacking any real thought or substance beyond potential racism), whilst the film’s Port Gamble mayoral battle is lost amongst the gore and uninspiring jokes.

A parody that fails to inject humour into its supposedly funny interpretation of the genre, ZMD cannot even be described as “So bad it’s good”, and is instead a “bottom of the barrel” Shaun of the Dead (2004) wannabe, lacking both the latter’s wit and pop culture reference-base.