In keeping with the current turmoil and unrest running amok in the world, Italy finds itself in a very confused state. Partly resigned, partly in denial, Italians have looked on as the recent recession has made worse what was a “not-really-thriving” situation already in terms of occupation, education reforms, and the political landscape in general.

Things have now somehow reached the point of non-return, and while the country’s being forced to answer questions of “What exactly is wrong with your Prime Minister” from the whole civilised world, young generations think about their future as a bit of a gamble.

It is therefore both a remarkable and surprising challenge the one the Italian Film Festival is planning to take on when it opens in London on the 1st of March 2011. Remarkable, as the event will provide a rare chance for the UK public to watch new and mostly non mainstream Italian films by talented filmmakers who, in some cases, do not get the exposure they deserve in the home country; and surprising, because this showcase, in a promise to hold high the flag for Italian “good” cinema, finds its hub in London (something which Italian immigrants will appreciate). 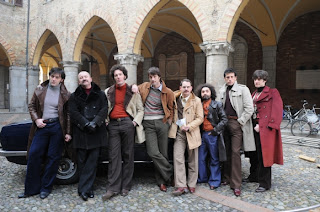 The Italian Film Festival will open with a performance by Nicola Piovani, film composer and the man behind the poetic and moving Oscar winning score of Life is Beautiful (1997).

The following days will see the screening of ten titles, eight of which selected by Italian film critic Irene Bignardi and two by Adrian Wootton of Film London.

Fans of Italian cinema will recognize some of the talents’ names – Toni Servillo, Carlo Mazzacurati, and others – and titles like Basilicata Coast to Coast (2010) and Angels of Evil (2010), which have both built quite a name for themselves back in Italy. The first, which tells of four friends’ emotional journey through Italy’s southern region Basilicata, had quite a successful box office run, collecting over €4 million (its cast also features internationally acclaimed actress Giovanna Mezzogiorno). The second, Angels of Evil, is directed by cinema veteran Michele Placido and has spurred controversy as it looks at the life of Renato Vallanzasca, one of Italy’s most infamous outlaws.

Great space is given to less known filmmakers, and the Italian Film Festival offerings tackle different themes through a variety of genres and communication modalities.

What image of Italy do these films paint is the question, and one which festival goers will be able to answer thanks to this comprehensive, emotional taste of Italian culture on screen.