It may seem cruel to be giving one of the most well known operas (and one that was well received during its run at Covent Garden’s Royal Opera House) such a poor review. However, the central problem of Carmen 3D (2011) isn’t the opera; the performances are predominantly very good, with a fantastic cast including Christine Rice as Carmen and Bryan Hymel as the jealous Don Jose. The real issue with Carmen 3D is the 3D.

The question of 3D cinema is becoming a bit of a tired debate now, with traditionalists saying it will never catch on whilst the studios plug more and more cash into 3D films. This review is not intended to give a long winded opinion on the technology’s merits and faults, but simply asks, “Do we need 3D opera?”.

I would suggest (quite strongly) that we don’t. The main argument that is levied by 3D advocates is that the technology creates a more authentic experience. Firstly, the medium of opera requires a suspension of disbelief because, like cinema, the experience is contrived. Nobody walks into a cinema or opera house and expects a reproduction of reality – why would we?. 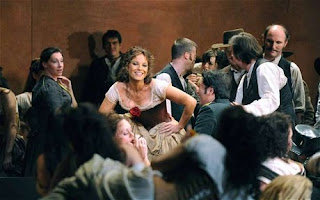 If anything, the 3D aspect distracted me from the opera itself, with “floating” subtitles that blurred into the background and pathetically inadequate shots of the Royal Opera House. In addition, we are entirely restricted at to what we view, once again removing any “real,” semblance of experiencing opera or the location itself. There are simply no opportunities to follow what a minor character is doing in the background or focus on the pit to watch the orchestra.

This is not to say that the editing and the concept as a whole are entirely awful. Francesca Zambello’s on-stage direction is beautiful, with some magnificent scenery. But ultimately this is all dwarfed by the patronising way in which Julian Napier has directed the recorded performance for cinematic consumption.

I am fortunate enough to have already seen Wim Wenders’ new 3D documentary/musical Pina (2011), and it was intensely beautiful – the 3D brought something extra, a further splendor. Carmen 3D was devoid of this magic. Annoying “behind the scenes” cutaways – deemed an extra treat – were quite the opposite; the pan shots of the opera house were nothing more than a cheap attempt to replicate the feeling of being in an opera house and the editing was abysmal. I can see no reason why anyone should go to the trouble of making such “films”, and if Carmen 3D is meant to be convincing us then it has categorically failed.