DVD Review: ‘Just Go With It’ 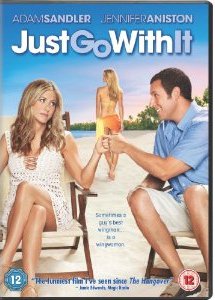 Just Go With It (2011) is everything you would want from a Sandler/Aniston flick. Two hours of mindless entertainment with a happy ending. If you rent the DVD and feel cheated because the cinematography wasn’t quite Lawrence of Arabia (1962) standard then you’re an idiot. You don’t buy a Big Mac and expect it to taste like fillet steak.

Sandler, plays Danny. A plastic surgeon jilted at the alter when he was younger who, for the last fifteen years, has used his old wedding ring as a way to pick up women. He meets Palmer (Brooklyn Decker) at a party and after spending the night with her on the beach she finds the ring in his pocket, and therefore he thinks she might be ‘The One’. Danny lies and tells her he is in the process of divorcing his wife. He then ropes his assistant Katherine (Aniston) into posing as his soon to be ex.

Yes, it’s a ridiculous premise and after explaining it I feel violated, but although the film is as preposterous and predictable as they come, along the way there are plenty of laughs to be had.

The two leads do what they do best, and there is a hint of chemistry between them. It doesn’t burn up the screen but they bounce off each other well. Bailee Madison and Griffin Gluck do a fine job as Katherine’s eccentric children and Nick Swardson manages to redeem a ridiculous character.

As for Brooklyn Decker, I apologise to any militant feminists reading this article but it has to be said; she is one fine looking woman or, as the wise Mr Wayne Campbell once said: “In French she would be called la renarde and she would be hunted, with only her cunning to protect her.”

Not since Bo Derek in 10 (1979) has a woman filled a bikini quite like Miss Decker and she seems a competent actress too. I don’t think she’s ever going to be an Oscar winner but I’ll definitely be following her career with interest. Mainly via the medium of Google images.

So, in conclusion, if you like light and fluffy Sandler/Aniston rom-coms Just Go With It will leave you spent and satisfied. On the other hand, if you admire the poetry of Ezra Pound and your idea of a good night out is an early twentieth century Hungerian Cinema retrospective followed by a bottle of Château Latour, chances are this isn’t going to be your bag.