Last night the best and brightest of British comic talent stepped out to take in the premiere of Joe Cornish’s debut film, Attack The Block (2011). A very contemporary and very British take on the popular alien invasion genre, it’s attracted a wealth of interest from movie goers and critics alike; not to be left behind, we donned our Sunday best and stepped on the red carpet to have a word with some its stars.

Marked by the kind of relaxed and easy going atmosphere you’d expect from director Joe Cornish, the event had that unmistakable feeling of family about it. Casting your eyes over the guests: Simon Pegg, Nick Frost, Edgar Wright and Louis Theroux amongst many others, it wasn’t hard to piece together the history that this small coterie of British talent shared; from their first outings in television and radio back in the nineties to the global super-stardom many of them enjoy today.

Louis Theroux was happy to recount the days he and director Joe had enjoyed back in college, dreaming of what the future might hold saying: “You know, he had a lot more direction than I did, he always knew that he wanted to work as a director and be in show business. He and Adam Buxton had this sort of aspirational company called ‘JoAd’, in which they were going to release a number of films, and Joe had a plan about all these films he was going to make. I was very much a hanger on, I loved hanging out with them and enjoyed their company – I didn’t know what I was going to do, but he had the vision.”

The film boasted a large cast of unknown acting talent from South London, we had a chance to speak to Leeon Jones, who plays Jerome in the film. We asked him what it was like working with Joe. “It’s like working with your brother, he’s a really nice guy, he’s really fun to be around.” 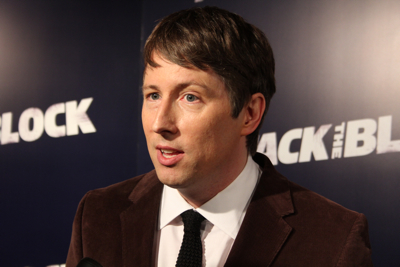 There were also a few more seasoned actors suring up the cast, including rising British star Luke Treadaway. How did he find it, working with all this raw talent? “Fantastic. It was like going on set and being the first time you’d gone on set yourself. It was fresh. It was exciting. They were excited it was like being in a playground, with tower blocks, aliens and big weed plants.” We were interested to know, with all the ‘street’ lingo in the script, how much of it was scripted and how much was spontaneous. “Joe was great he encouraged us to think about scenes and come up with our own ideas. But to be honest, the script was so good we didn’t deviate from it that much.”

Of course, we also had a chance to speak to Joe himself. He seemed to be in high spirits as he spoke to the press, answering questions with the kind of unflappable wit that he‘s known for in his radio shows and podcasts. We asked him if David Cameron’s ‘Hug a Hoodie’ campaign had been part of his inspiration for the film. “Not at all. My film is very empathetic towards the characters. It’s a movie, the story we’re telling is that the kid that did a bad thing, is also capable of doing a heroic thing. So, if that’s his message, I agree, but my film has it’s own, very specific thing to say – it’s a film about people and characters, I wouldn’t want to get political on it’s arse!’

The film is based entirely in South London, where Joe himself grew up, we wanted to know how much things had changed since his day. “I think South London is wonderful, it’s improved massively since I was a kid: there’s less corrugated iron, less fly posting, there’s more restaurants and shops, I think it’s a fantastic community.”  And what does he think the kids down in Lewisham will make of his film? “I hope they’ll love it.”

Joe has strived for authenticity in Attack The Block, as such, his characters speak with a strong South London dialect; we were interested to know how he felt that might go over with a global audience. “Were pretty confident that English-speaking, international audiences will understand what’s going on in the film. We made a real effort to make the glossary of words the kids use small, so even if your ear isn’t attuned to these words you can pick it up as you go along.”

Joe’s long career with friend Adam Buxton has thrown up a wild array of strange characters and sketches. We couldn’t resist asking what he thought one of his early characters Ken Korda, might make of his film. “Ken? Err… I think he would be angry and probably confused, but then, that’s just another day in the life of Ken Korda…”

Attack The Block will be released in cinemas nationwide from Friday 6 May, 2011.