Film Review: ‘Hobo with a Shotgun’

With a title that equally works as a synopsis, Jason Eisener’s Hobo with a Shotgun (2011) is an uber-cool and suitably gratuitous homage to the exploitation movies of the 70s and 80s. Starring veteran actor Rutger Hauer, the film does exactly what it says on the tin; a homeless vigilante, despondent with the corruption and debauched existence of a Nova Scotia hellhole, gets a gun, lets rip, and delivers justice “one shell at a time.” This austerely simple story follows Hauer’s aforementioned Hobo as he arrives in the simmering town of Hope via boxcar train – a sequence that is perhaps the most endearing of Karim Hussain’s camerawork in the feature.

Hauer’s character roams the streets and eventually sets up shop pan-handling outside a bar-meets-S&M-torture-chamber-video-arcade. Here we are introduced to the super-villains of the picture, town kingpin, Drake (Brian Downey) and his two sociopathic sons, Slick and Rip (Gregory Smith and Nick Bateman), who we see decapitating tramps with bumper cars. Upon rescuing a hooker from certain death at the hands of Slick (who has an almost uncanny resemblance to a Risky Business (1983) era Tom Cruise – wayfarers and all), our protagonist meets his lone companion, Abby (Molly Dunsworth), who shares the same disdain for the town and helps Hobo on his mission. 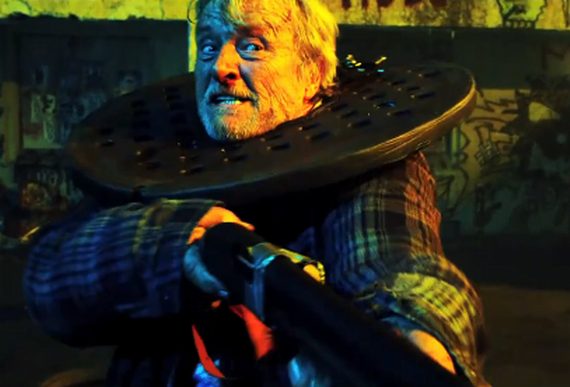 From here on in the Hobo immerses himself in the macabre. With a shotgun at the ready, he systematically dispatches the town’s low-lifes with vicious élan; a pimp, an exploitation-video producer, a paedophile dressed as Santa Claus – you name it, Hobo shoots it. Whilst our protagonist wreaks his vengeance, Eisener’s antagonists delve into a psychotic frenzy, exacting death and mutilation by manhole cover and topless women wielding baseball bats. Even a school bus full of children feel their wrath – burnt to a crisp by flamethrower. In each case Jason Eisener proves his willingness to go over the top and beyond, with the latter scenario proving highly controversial given the fact that it is presented as a cause for laughter.

As has been noted, Eisener’s film is incredibly adept in its self-referential and inter-textuality – you could run of a long list of titles that Hobo is in debt to but perhaps the more protuberant ones would be Raimi’s influential Evil Dead II (1987), with Abby’s ingenious adoption of a make-shift weapon using the her bone stump as a shank; the psychedelic sways and garish colour schemes of Gregg Araki’s The Doom Generation (1995) and with it’s gang-war attitude and cityscape dystopia, Walter Hill’s cult classic, The Warriors (1979). Fittingly, even Ewen Dickson’s production design is reverentially stuck in the early ‘80s, somewhat of a Mad Max (1979) on crack, the same goes for the film’s sound design and intentional hammy acting.

Some may argue that Hobo with a Shotgun encapsulates a joke worn thin, but the B-movie energy that pulses through the veins of this beast is not to be denied. Eisener’s film exists solely to push buttons but it is a more honest, less self-conscious re-creation of the cinematic exploitation era, so much so it puts Rodriguez and Tarantino to shame.