Swords, knights, castles and a cruel king, what more could a boy ask for? Not much! Ironclad (2011) shows what a talented director can do on a relatively small budget (roughly $25,000,000). It appealed to my boyish obsession with knights riding around on horseback, swinging swords, wreaking havoc, and generally unleashing the dogs of war, all set in a large imposing castle, with working drawbridge, and a damsel in-distress for good measure.

Ironclad is the third feature from Jonathan English and it is his strongest. Throughout the film you sense his passion for the story and his love of medieval architecture. Indeed, you even gain a sense that Rochester Castle (where the action takes place) becomes something resembling an over-arching character throughout the film.

The year is 1215 and the cruel, tyrannical King John, played by Paul Giamatti (in a wondrously paranoiac style) is on the throne and has been forced, by his barons, to sign the Magna Carta, thus starting the basis of common law in England. In response to having power taken away from him, John gathers a band of scary Viking mercenaries, including the moody and muscular Vladimir Kulich (The 13th Warrior), who plays Tiberius. John plans to take back the lands recently lost to him by attacking the castles of the previously disloyal barons. Meanwhile, a band of seven rebel warriors, led by Baron Albany (Brian Cox), decide to fight back and defend Rochester castle until the French arrive.

There is frequent homage made to films of the past such as The Viking (1958), The Warlords (2007) and Kurosawa’s Seven Samurai (1954) (there is even a scene where the seven line up and ride over the hill towards Rochester Castle in the rain). This merry band of men includes a guilt wracked Templar, Marshall, played by Rome’s James Purefoy, the blood-thirsty mercenary Beckett (Jason Flemying), and the young squire Guy (new comer Aneurin Barnard). 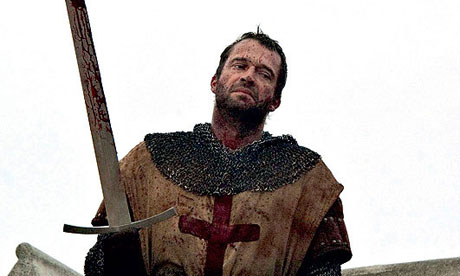 Ironclad is incredibly violent and visceral and the violence is filmed in such a way as to draw the audience right into the heart of the action. There are familiar tricks of blood-splatters to the camera and swords meeting bone, very much reminiscent of the profoundly realistic quality of the opening scenes of Saving Private Ryan.

The battle scenes are when this film really shines but interspersed, as they are, with the various subplots of the individual characters, it manages to be more than a just gore fest and there is a sensitive understanding of the importance of pace in action-adventure films exhibited by the director.

There is also the obligatory love story between Marshal and Isabel, the lady of Rochester Castle (Kate Mara), which breaks up the action and again assists with the pace. Mara’s character is in an arranged marriage to Reginald de Cornhill (Derek Jacobi), who owns Rochester. The only problem with this aspect of the plot is that it feels a little under developed. There is sense to its presence in the film since both Purefoy and Mara’s characters are trapped by, and long for freedom from, their pasts but this isn’t enough to make us sufficiently engaged with their story

It does, however, help to give more depth to Marshall’s character (a tactic that occurs with some off the more minor rebel warrior characters as well). The only other glaring fault was that the voice-over regarding Magna Carter felt a little dated; we have all seen a few too many historical films opening with a map, a montage and an ominous voice.

What I felt after watching Ironclad was that I had just watched a British indie-historical-action flick, a phrase not often written, heard, or said. Jonathan English has really raised the bar when it comes to what is possible in British cinema. He has assembled an incredible cast of well-known and respected actors, as well as discovering new talent in Barnard. The action and effects were impressive and although Ironclad is not without its faults it is worth a watch simply to show how good relatively un-complex and entertaining films can be