Bertrand Tavernier’s The Princess of Montpensier (2010) is one of the finer examples in recent years of a good historical romp, with love affairs and sword-fights aplenty realised in an intelligent and captivating manner. Stylistically, it is reminiscent of Ridley Scott’s The Duellists (1977), and the film possesses that lavish yet gritty feel that submerges you into the world of 16th century France.

The film is based on the 1662 novella by Madame De Layfette. Starring Mélenine Thierry and the charming Lambert Wilson, this intelligent historical love story is one that will appeal to many.

The action is set during the ‘War of Religion’ between the Huguenot Protestants and the ruling Catholics during the reign of Charles IX. Layfette’s novel was originally published anonymously as the plot touched a little too closely on contemporary events, namely an affair between Henrietta of England and the Comte de Guiche, thus her reason for setting the events 100 years prior (history lesson over, promise). 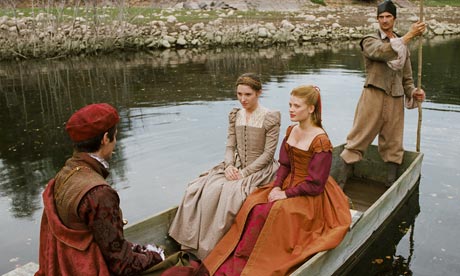 Marie (Thierry) is married off by her father to the Prince de Montpensier (Grégoire Leprince-Ringuet) despite the fact that her heart belongs to Henry de Guise (Gaspard Ulliel), cousin of the Prince. Once married the Prince is summoned to fight in the war and leaves his new wife in the care of his trusted friend the Comte de Chabannes.

Due to various circumstances, Marie is brought to court in Paris where the new court favourite the Henry de Guiche has returned. The result is a clash of high emotions in this complex pentangle of love particularly between the Prince and Duc de Guise. To heighten the drama, the Comte too has fallen for the beguiling charms of Marie who has also found the eye of the future king of France the Duc d’Anjou (Raphaël Personnaz).

Over two hours of ‘toing’ and ‘froing’ relationships, The Princess of Montpensier could easily have become a tedious film; however with the backdrop of the war there is plenty of action to keep you entertained. There are oodles of buckles being swashed and men defending everyone and anyone’s honour. The cast performances are incredibly strong and the character development has clearly been well thought out leaving us highly engaged with their back-stories.