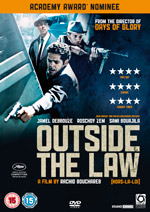 Rachid Bouchareb’s Palme d’Or-nominated Outside the Law (Hors la loi, 2010) is much more than a fictionalised and reactionary account of the oppressed and the oppressor; it deals with a subject that is deeply embedded in the history of French/Algerian relations, arguably opening the door for the issue to be discussed more openly in the future.

Recent uprisings in the Arab world makes Outside the Law a very topical film; it illustrates the impact of colonial rule upon a nation and the resultant oppression of that nation’s citizens, but in turn it highlights effectively the resolve of humanity to seek justice and rights as a result.

Beginning during the early years of Algerian uprising, Outside the Law charts the lives of three brothers, and their mother who find themselves spread out across the globe following their father’s death: Messaoud (Roschdy Zem) joins the French Army fighting in Indochina; Abdelkader (Sami Bouajila) becomes a leader of the Algerian Independence movement in France and Said (Jamel Debbouze) moves to Paris with his Mother in an attempt to make a fortune. Gradually, their interconnecting destinies reunite them in the French capital, where freedom is a battle to be fought and won.

Outside the Law unfolds in chronological order, shifting from Algeria in 1925 through to the French capital in the years that follow. Its narrative is interspersed with archival footage of marches and fighting that was documented at pivotal moments during a period of tense relations between French and Algerian people, helping to reassert the authenticity of dramatised acts of inhumanity perpetrated by French colonial rule. Documentary-style images of this nature seem to add weight to the films message by visually authenticating its subject matter, and by using them sparsely at regular intervals, Bouchareb maintains a seamless yet foreboding narrative. 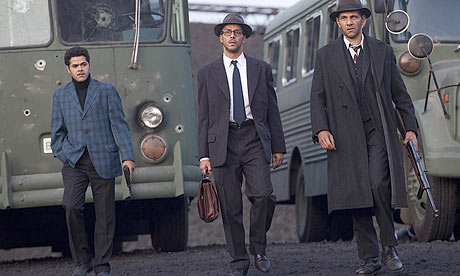 Like previous efforts Days of Glory (2006) and London River (2009), Outside the Law tackles subject matter that is of deep interest to Rachid Bouchareb and illustrates how unafraid he is of controversial issues. To this date the Algerian war is still a source of tension in France and this film in many ways is the first to address the issue head on.

If film ever truly serves as a mirror for society then Outside the Law is exemplary in doing just that. While relatively stylised in places, the film is hard and gritty and manages to effectively hammer its point home using well crafted shots that help to recreate the tragedy of the blood that was spilt and the lives that were lost in order to achieve Algerian independence.

Headed up by Jamel Debbouze – known this side of the channel predominantly for his part as Lucien in Amelie – Outside the Law offers a supremely strong cast. With a respectable performance from Roschdy Zem as returning and hardened soldier Messaoud, and Sami Bouajila’s portrayal of the guarded Abdelkader, this film with its powerful subject matter is effectively reinforced by the performances of its cast – right from the minor parts through to the lead roles.

In places, one could argue that Outside the Law puts aside its duties as a piece of cinematic entertainment, with its responsibility to edit effectively in order to maintain the interest of its spectators as it repeatedly allows sustained amounts of time for reflection, using prolonged shots that utilise setting, mise-en-scène and lighting to create a believable sense of realism but in fact it is those qualities that make it a wonderfully crafted piece of film with each of those aforementioned components comprising to create a compelling watch.

Bouchareb’s Outside the Law sets a benchmark for future cinematic explorations of the exploits of the Algerian people at the hands of French colonial rule, and does so with a degree of class and an array of affecting performances.