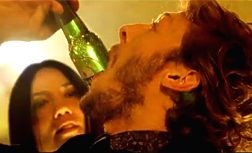 Dutch lager giants Heineken has just released the second viral film in their ‘Legends’ online marketing campaign, and is the follow up to the brand’s hugely popular Entrance video series. More and more big names are realising the potential of viral videos, and with their latest effort – The Date – Heineken have chosen to turn the classic date scenario on its head, presenting a contemporary spin on the fairy-tale, whilst reaffirming the age-old mantra that there is ‘somebody out there for everyone’.

The Date follows one Heineken drinking Casanova as he woos a pretty girl on what becomes an epic date. The viral begins with the star crossed pair entering a restaurant / theater via a secret kitchen entrance known only to our savvy protagonist. His entrance then proves the catalyst for a series of encounters between the loved-up couple and a ballroom full of eccentric characters. The ad’s soundtrack evokes memories of 60s era Bollywood and other cult cinema, familiar to anyone who has sat through Quentin Tarantino’s Kill Bill  twin features or any of the director’s other highly intertextual features.

Heineken plans more viral content later in the year, introducing an interactive phase of the campaign where viewers could potentially orchestrate the action from the comfort of their armchair. Head over to Facebook.com/Heineken for the most up-to-date information on new content from the Dutch beer barons.