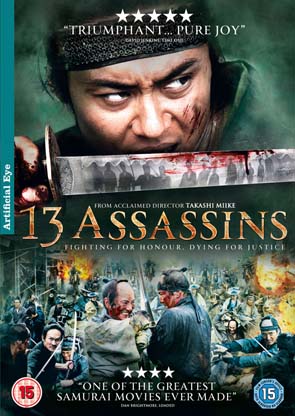 From Takashi Miike – the twisted genius behind cult J-horrors Audition (1999) and Ichi the Killer (2001) – comes 13 Assassins (2010), a traditionalist yet bloody take on the samurai action adventure film which was rightly nominated for the Golden Lion at the 2010 Venice Film Festival. Released to near-unanimous critical acclaim back in May, 13 Assassins now makes its way onto DVD and Blu-ray from Monday 5 September, and stars Kôji Yakusho, Takayuki Yamada and Yûsuke Iseya.

Set in mid-19th century Japan, 13 Assassins follows the story of a group of morally-driven samurai, grouping together to form a posse in order to dispatch the current Shogun’s sadistic, maniacal younger brother Lord Naritsugu (Gorô Inagaki). Your built-in plagiarism detector is probably screaming ‘Akira Kurosawa’s Seven Samurai (1954)‘ at this moment in time, but Miike’s effort has enough about it to distance itself from Kurosawa’s classic – it is in fact a loose remake of Eiichi Kudo’s 1963 film Jûsan-nin no shikaku – and remains a fitting homage to the work of both directors and the samurai sub-genre as a whole.

The hugely charismatic Japanese actor Kôji Yakusho (perhaps best-known for his role in Masayuki Suo’s Shall We Dance [1996]) plays lead samurai Shinzaemon Shimada, one of the few true remaining stalwarts of the fading samurai code of honour. After witnessing first-hand just how barbaric and cruel Lord Naritsugu has been to his own people, Shinzaemon begins the unenviable task of recruiting a crack-team of battle-hardened samurai warriors capable of penetrating Lord Naritsugu’s bodyguard battalion (headed up by Shinzaemon’s old adversary Hanbei [Masachika Ichimura]) and assassinating the rogue tyrant. 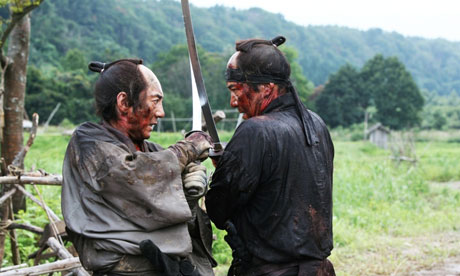 We’re naturally provided with a wide array of personalities within the posse – from devoted masters of bushidō to more hands-on, fast-and-loose fighters – and this is perhaps the film’s one major flaw. With thirteen samurai to keep track of throughout (as opposed to Kurosawa’s seven), many of the extended cast of characters feel somewhat underdeveloped. The second half of the film is essentially an hour-long bloodbath between Lord Naritsugu’s two hundred-man armed escort and the thirteen samurai, and as some of the warriors inevitably begin to fall, there are certainly some demises that have more impact than others.

Despite this criticism, 13 Assassins’ final showdown is an incredible, balletic blend of choreographed swordplay, mud and blood. Miike thankfully uses CGI sparingly – the director himself has stated that special effects were only used to depict that which could not be achieved through conventional means – a prime example of this would be the introduction of a herd of flaming cattle, ignited by the samurai and left to run amok amongst Lord Naritsugu’s men.

For fans of samurai cinema, 13 Assassins ranks right up there with Yôji Yamada’s The Twilight Samurai (2002) and Takeshi Kitano’s The Blind Swordsman: Zatoichi (2003) as one of the finer additions to the sub-genre in recent years. Miike fans will undoubtedly find the film a slight departure from his most famous / infamous efforts, yet provides further evidence of how versatile and accomplished the Japanese director has become.