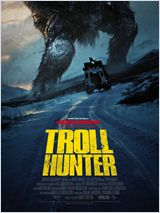 André Øvredal’s Norwegian monster movie Troll Hunter (2010) has been reviewed to death already and if you want to check out our editor’s public burning of the flick then click this link and strap on your welding goggles. I agree with most of his diagnosis. On one hand Troll Hunter is a horror film in the mode of The Blair Witch Project (1999) and The Last Broadcast (1998), but it’s about as terrifying as being hit by a marshmallow hammer.

On the other hand it’s a darkly comical mockumentary about a couple of college students following around a strange stoic backwoodsman (Otto Jespersen) hired by a shadowy government agency to hunt down giant trolls. The comedy element, to an extent, succeeds, but the laughs are so dry and infrequent that many viewers will miss the humour completely.

There are far too many scenes of people in bobble hats running through dark woods being chased by an invisible troll and it takes a long time for the beast to be fully unveiled; a trick that worked in Cloverfield (2007) but the temptation to shout “get on with it” during the umpteenth chase through the pine trees was mighty indeed. 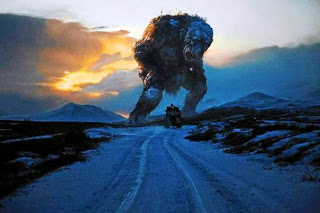 For all the film’s problems, I did leave the screening room impressed. Øvredal might not have succeeded in making a great film, but his ambition has to be respected. His use of the Norwegian landscape, particular in the final snow drift showdown were nothing short of awesome. His skill with the wide shot far exceeding the shaky camera action of the chase scenes. In fact it was during the climax that I realised Øvredal owes more to Ray Harryhausen then the likes of Blair Witch and if a remake of The Golden Voyage of Sinbad (1974) or Jason and the Argonauts (1963) ever gets off the ground, then I believe Øvredal and his team deserve to be considered to take the wheel.

Another recent film which has much in common with Troll Hunter is Gareth Edwards’ Monsters (2010) which I admired because of what was achieved on such a low budget, but at the same time loathed. A lot of promotional cash was thrown at Monsters and the hype didn’t match the quality of the product. Troll Hunter has also been heavily promoted and again, it’s not as good as billed, but due to the low production costs it is worth throwing a million or so at a viral campaign – because you’re going to make your money back, and then some.

I expect to see more Troll Hunter and Monsters type efforts trickle out of the dream factory over the next few years. Some will be worth the ticket price and others will be expensive packaging and cheap content so do beware and make sure you are not being sold a dummy.

You can find the editor’s Troll Hunter review here.