If you have any experience of Dutch director Dick Maas’ previous work, you will most likely have been eagerly anticipating his latest schlocker Saint (2010). If, however, this is the first time you have heard his name, his homage to 1980s slasher films – starring Huub Stapel, Bert Luppes and Egbert Jan Weeber – is as good an introduction as any to this individualistic filmmaker’s take on the slice ‘n’ dice genre.

It’s 5 December, and Amsterdam is echoing to the sound of ‘slay’ bells ringing as it’s terrorised by a murderous incarnation of the legendary Saint Nicholas (Stapel). It’s left to Goert (Luppes) – an ex-cop with more reasons than most to want to stop the killings – and high school misfit Frank (Weeber) – who becomes involved after his friends are systematically made into mincemeat by the killer Santa – to end the mayhem before ‘bad’ Saint Nick, makes this a holiday to remember for all the wrong reasons. 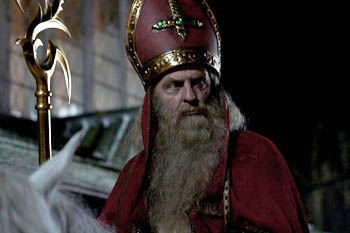 That the majority of people outside the Netherlands have probably never seen Maas’ work (unless you’re a die-hard fan, it is notoriously hard to get hold of) or any of the cast either, is a shame as everyone involved with Saint is surprisingly good. The fact that there’s not much originality to the story (OK, so good Saint Nicholas hasn’t been given homicidal tendencies before, but as a general entity killer Santas are nothing new), doesn’t detract from the film.

The Christmas carnage feels fresh, set against the pristine backdrop of a snowy Amsterdam, and the whole production is carried off so slickly and with such clear relish by those involved that you’ll forget John Carpenter gave it to us all before with babysitters in jeopardy in Halloween (1978) and murderous goings-on upon mist-shrouded boats in The Fog (1980).

On the downside, there is a disturbing emphasis on child killing, particularly in the scene set in the children’s hospital. However, when the perpetrator of these grisly events is a cassock-wearing zombie backed up by a horde of the undead, the age and gender of his victims ceases to have much relevance.

Saint adds a dash of blood red colour to the saccharine Yuletide image of Saint Nick so often portrayed in cinema, and will hopefully draw wider international attention to Maas’ hitherto neglected work.