Apparently a huge hit with audiences back in its homeland of New Zealand, The Insatiable Moon (2010), was directed by Rosemary Riddell from a screenplay by her husband Mike Riddell, based on his own novel. It follows a set characters in the Ponsonby suburb of Auckland City, in particular the residents and supporters of a boarding house which is home to a variety of mentally unwell and otherwise homeless men.

There’s trouble afoot, however; a smarmy real estate agent – along with half the town, apparently – is determined to close down the boarding house so he can sell it on.The key players are the childless Margaret (Sara Wiseman); the boarding house owner, Bob (Greg Johnson); the vicar, Kevin (Jason Hoyte); and the beaming Arthur (Rawiri Paratene), who claims to be the ‘Second Son of God’.

Arthur himself, as played by Paratene, is actually a likeable, cheerful kind of guy. He bubbles around ton with a smile on his face and a bounce in his step, offering enigmatic wisdom to all those with whom he comes into contact. There might have been a great film to be made about Arthur, with his unsettling claims and bulletproof smile. Yet, after about half an hour of the film, the characters of The Insatiable Moon stop treating Arthur sensibly. Gone are the uncertain, polite smiles, replaced by wide-eyed acceptance. 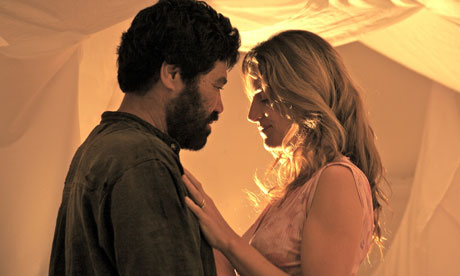 People in hard times want to believe; or to paraphrase the film’s evident Christian ethos, people need to rediscover their humanity through religious faith. But everyone in this film is taken under Arthur’s spell. The film itself is under Arthur’s spell, and that will stop some from joining in.

When Paratene eventually swaps out the broad, open smile for a kind of apocalyptic intensity, you’d be forgiven for hoping that the bonkers plot would take a turn even further down the road of Christian madness, but alas, it restricted itself to the fairly acceptable ambiguity of blink-and-you’ll-miss-them angels and the coincidences that may-or-may-not by Arthur working miracles.

The Insatiable Moon is evidently a labour of love for those involved, but whether it will find much of a following outside its homeland is questionable. There are funny moments, but not enough to call it a comedy, and the drama is entirely flat – nothing about it really works the way it is supposed to.