When the announcement came that Steven Spielberg and Peter Jackson would be bringing Hergé’s famous boy detective Tintin to the big screen in The Adventures of Tintin (2011), most of us thought that if any pair could do the books justice, it would be those two master craftsmen. Rumours swirled that it was going to be live action and everyone raised an eyebrow, but when the dreaded words ‘motion capture’ and ‘3D’ emerged, it was instantly labelled a lame duck.

Based on three classic tales – The Crab with the Golden Claws, The Secret of the Unicorn and Red Rackham’s Treasure – we skip any origin story and are dropped straight into the world of Tintin (Jamie Bell) who is already well-known for his good deeds and canny detective work. 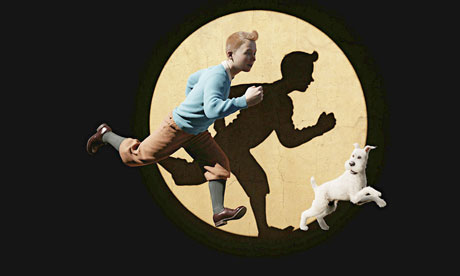 During an amble around a market, the boy detective comes across a model of a ship, ‘The Unicorn’, and having a keen eye for interesting artefacts he buys it off the stall owner at a knock-down price. Almost instantly he is approached by a large, sweaty man who wants to buy it off him. When Tintin refuses, the man warns him to get rid of the ship as it will bring nothing but trouble – at which point the dastardly Ivanovich Sakhrine (Daniel Craig) appears from the shadows, also offering to purchase the ship.

A breakage, a burglary and knock on the head later, Tintin discovers a piece of an old map inside the ship’s mast leading to the legendary treasure of the notorious pirate Red Rackham. After being kidnapped and dumped in a cargo crate, Tintin finds himself aboard the Karaboudjan, a merchant vessel helmed by irritable drunk Captain Haddock (Andy Serkis), who has been the victim of a mutiny. Tintin and Haddock team up, escape the clutches of Sakhrine and journey forth to find the missing pieces of the map.

The Adventures of Tintin presents Spielberg in his element. We’re very firmly in Raiders of the Lost Ark (1981) territory and the whole film plays out as a fun, sweeping adventure via land, sea and air with great set pieces and plenty of humour. His respect for Hergé’s original stories cannot be doubted and all but the most purist, hardcore Tintin fan should enjoy the ride.

As for the animation. It’s far and away the best example of 3D and motion capture to date, yet still there are issues with expressionless characters (and the glasses will always be a distraction). The potential is certainly there to create cinematic classics which stand the test of time, but it hasn’t quite happened yet. However, if Spielberg’s The Adventures of Tintin has achieved anything, it is hope for the future.