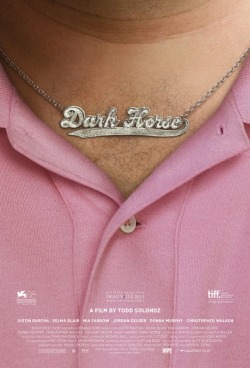 It’s tempting to say that Todd Solondz’s seventh feature, Dark Horse (2011) – starring Justin Bartha, Selma Blair and Zachary Booth – is something of a departure, but in truth it never really escapes the universe of Planet Solondz. Once again we are planted firmly in a universe of uncomfortable misery, with characters who are neither particularly pleasant nor nice, and with Dark Horse Solondz has once again succeeded in creating a world of neuroses and angst.

The film begins with a wedding scene, an exuberant of celebration of life and love, but the fleeting happiness is only there to be contrasted with the grim fate of those involved. Abe (Jordan Gelber) and Miranda (Blair) sit in a corner and although Abe gallantly offers to dance, Miranda assures him this is not going to work. Abe is an unpleasant, immature, selfish piece of work, sponging off his long-suffering parents (the sublime and almost unrecognisable Christopher Walken and Mia Farrow), bidding for ThunderCats toys on eBay and getting into ‘hissy fits’ with toy shop assistants who refuse to exchange damaged goods. 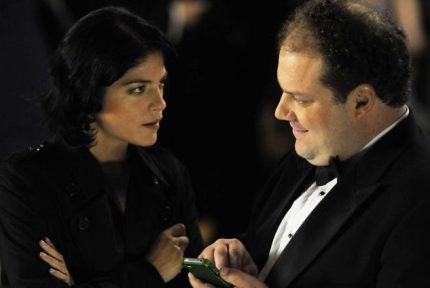 Abe’s life seems to be on the verge of turning around as, miraculously, Miranda (formerly Vi from 2001’s Storytelling, both played by Blair with slack-jawed brilliance) accepts – on second thoughts – his proposal of marriage. The formula seems set for a redemptive tale where Abe – despite all his problems, feelings of inferiority and nerdish loneliness – gets the girl, winning her from a slimy rival (the hilarious Mahmoud – “I’m into watery sports”), because gits deserve happiness too.

But this is the genius of Dark Horse. Solondz’s deconstruction of the Judd Apatow ‘man child’ comedy formula defies audience expectations brilliantly as Abe experiences a series of life-changing mishaps, which are more than simply obstacles to be overcome. Rather they are life itself: “You know how some people wish their dreams were true” Abe opines – “I don’t”.