Winner of the Best Debut Feature award at this year’s Raindance Film Festival, Viktor Chouchkov’s Tilt (2011) may well be flawed and occasionally cringe-worthy, but it’s also fantastically fun and formally assured. Set in the late 1980s as Bulgaria’s political landscape was in a state of flux, the film details the tumultuous relationship between young lovers Stash (Yavor Baharov) and Becky (Radina Kardjilova) as they experience the hardships existing on both sides of the 1990 free election that dissects the film. 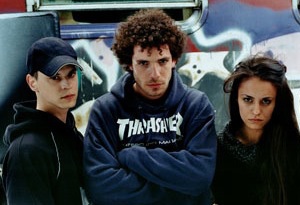 However – perhaps an inevitable bi-product of such breeziness – Tilt feels slight, despite the epic scope of its political backdrop. The central love story is very sketchy, hindered greatly by Yavor Baharov’s squinty, one-note performance in the second half of the film (he is excellent for the entire first act) pouting and perpetually staring dreamily into the middle ground, just in case we’ve forgotten that he’s really, really sad. Tilt is an extremely technically assured feature, Rali Raltschev’s superb RED digital cinematography matched blow-for-blow by first time director Chouchkov’s skilled structural and compositional choices. However, the film is held together by its lead performances, with special mention going to Kardjilova and the wonderfully odd Ovanes Torosian.

Ultimately, Tilt doesn’t amount to much, but once watched it will be remembered fondly – from the first montage of the couple kissing, the camera circling 360 degrees as the music swells, you realise that any real weight is out of its grasp. However, taken on its own imperfect terms, there’s very little you would want changed.