In its attempt to tackle themes of loneliness, alcoholism and adolescence, Finola Geraghty’s Come on Eileen (2010) fails to successfully break into the category of gritty social realism, eventually lapsing into the realm of melodrama and soap opera in spite of its best efforts.

Focusing on Eileen (Jackie Howe), a forty-something single parent of two children, Come on Eileen follows the protagonist’s descent back into alcoholism having seemingly been on the wagon for a lengthy period of time. Following her first sip of champagne at a social event, Eileen’s change in behaviour is made immediately obvious to her teenage son, as well as her slightly older daughter Gypsy (Mercedes Grower), with whom she already shares a somewhat tempestuous relationship, having never allowed her to know the true identity of her father who committed suicide before she was born.

Although Geraghty certainly takes a spirited approach to the exposition of her subject matter, Come on Eileen is an ultimately underwhelming and at times cringe-inducing affair. Its worst moments are often the result of the director’s endeavour to force the ‘grittiness’ of the film across to its audience, resulting in a sense of contrivance and melodrama. For this reason, one can feel as though they have been dropped in on an episode of Eastenders, as opposed to the territory occupied by Ken Loach’s Kes (1969) or Mike Leigh’s Another Year (2010). 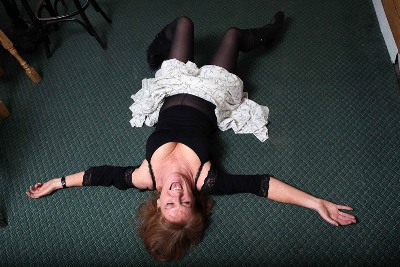 Howe’s portrayal of the increasingly desperate Eileen is without question one of the film’s main highlights, yet her performance is still guilty of occasionally stepping into the aforementioned melodrama as her descent into alcoholism grows more rapid. Less successful is Grower in her depiction of Gypsy, whose performance lacks the necessary conviction to really connect with the audience.

Come on Eileen also offers a series of unnecessary cameos from some famous UK comedy actors, which feel extremely out of kilter with proceedings. Keith Allen appears briefly as Eileen’s ex-husband Martin, while Julia Davies chats to a lonely Eileen in a pub one day, sharing her relationship troubles. Both performers are perfectly adequate in their short performances, however, their inclusion seems only to serve the purpose of misleading the audience into seeing the movie, as their names feature heavily in the film’s promotion, despite their minuscule presence. In addition to Allen and Davies, Noel Fielding also crops up from time to time in a painfully wooden turn as Gypsy’s rock star boyfriend Rex, turning in a performance that could best be described as failed self-parody, looking uncomfortable in a role that paints him as a shallow, superficial scenester on the rock ‘n’ roll circuit.

It is the overall sense of desperation that really lets Come on Eileen down. From many of the performances, through to the unnecessary cameos, Geraghty’s film is never able to capture the air of social realism it so desperately strives for.