Filling the traditional cinematic turkey position in this year’s lineup of Christmas-themed releases, The Nutcracker in 3D (2010) is a hauntingly amateurish experiment in trashing the beloved original ballet by subjecting a superb cast to an embarrassing amalgamation of sloppy direction and bland, undeveloped CGI. The essential magic of the story is swapped with a strangely perverse, revised tale that resembles an over-budgeted pantomime more than a child-friendly adventure.

Filmed in 2007 but only now seeing the light of day here in the UK in a straight-to-DVD release, The Nutcracker in 3D was apparently twenty years in the making for Russian director Andrey Konchalovskiy, who believed that releasing it in 3D would benefit the film’s fantastical nature. The set design and scope of the narrative is both extravagant and murky, yet one can only imagine how increasingly muddied it would have looked behind those dimmed glasses.

Set in 20th century Vienna, the film sees Elle Fanning (in her worst performance) play Mary, a privileged, under-loved child who, along with her brother Max (Aaron Michael Drozin), is given the gift of a wooden nutcracker doll by lovable Uncle Albert (played with zeal by Nathan Lane, channelling Albert Einstein), who prances around and sings about the theory of relativity. 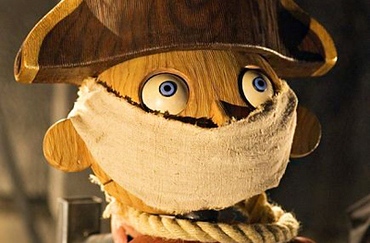 Eventually, said Nutcracker (oddly voiced by Shirley Henderson) comes to life and ensnares Mary and Max in a life-and-death struggle to save his kingdom from the evil Rat King (John Turturro, laughably camp), whose primary claim to villainy is burning kids toys to block out the sun with black smoke.

Consciously banishing any trace of ballet, Konchalovskiy has wrapped a garish noose around the original story, allowing fragments of Tchaikovsky’s score to occasionally fill in the gaps between the awfully unmemorable songs that are shoved in haphazardly as reminder of the film’s source material. Scripted by Tim Rice, the songs – although terrible – do at least beef up an already over the top performance from Turturro, who struts around in a coiffed white wig and performs two numbers that need to be seen to be believed.

Without narrative urgency (or sense for that matter), The Nutcracker in 3D is a woeful tour de force in cinematic mortification, an ill-conceived mess that shrugs off the whimsicality of the ballet and replaces it with a gangly excavation in terrible filmmaking. What is palpable is just how desperate Konchalovskiy appears to be in attempting to create a worthwhile and goodhearted tale of good vs. evil where toys magically come to life. Toy Story (1995) this ain’t, and no amount of visual trickery can save it from being a turgid lump of coal that does not belong in even the naughtiest child’s stocking this Christmas.