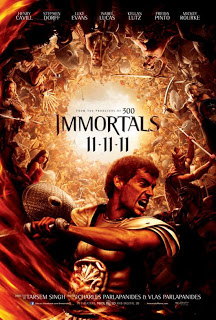 In the mists of time, the Greek god Ares forged the Epirus Bow, a weapon of unimaginable power. He hid it knowing that whoever possessed it could unleash the Titans, a group of super beings who will wreak havoc upon humanity if ever released from their captivity within Mount Tartaros. Eons later, King Hyperion (Rourke) is hellbent on finding the Epirus Bow and ruling the earth. But he hasn’t counted on the intervention of lowly peasant Theseus (Cavill), who has one advantage over the tyrant – the backing of the gods. From the very start of the film in Theseus’ village – which clings vertiginously from a cliffside high above the jagged rocks and crashing waves of coastal Greece – Immortals bares the unmistakable touch of Tarsem Singh. 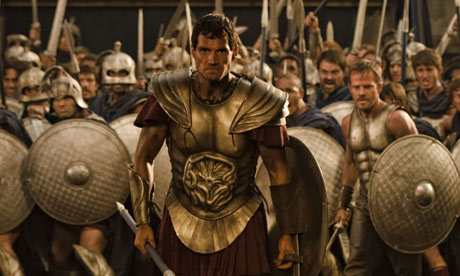 This individualistic director’s style of blocking backgrounds in varying degrees of the same colour, as he did with his cinematic oddities The Fall (2006) and The Cell (2000), brings the stark beauty and barbarity of ancient Greece to life, its sun baked earth splattered with bloody hues during the frequent battles between the humans and gods.

The pure fantasy of the story also lends itself perfectly to Singh’s otherworldliness (soon to be seen yet again in the director’s reworking of Snow White in Mirror Mirror [2012]), as he makes Mount Olympus an ethereal retreat for Zeus and his deceptively languid offspring.

This beauty is offset by the sheer ferocity of the humans. Rourke is savagely single-minded as Hyperion, whilst Cavill’s Theseus has the right mix of humanity and god-worthy gravitas, making him a worthy successor to Zeus. But the film’s earthbound heroics could prove its Achilles’ Heel. Its 3D aspect works well, if anything adding to the battles regularly peppering the plot. The level of noise however which permeates most of the proceedings is ear shattering and, though undoubtedly authentic in a war, seems blown out of proportion on the big screen.

Ultimately, Immortals is an affectionate homage to those mythical epics from old school Hollywood, but perhaps the film’s producers should have included earplugs alongside the 3D glasses.