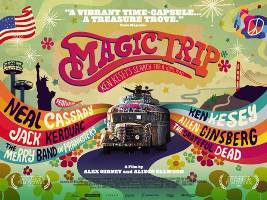 In 1964, Ken Kesey – author of One Flew Over the Cuckoo’s Nest – set off on a LSD-fuelled road trip to the New York World’s Fair. He was joined by ‘The Merry Band of Pranksters’ a renegade group of counter-culture truth-seekers including Neal Cassady, the American icon immortalised in Jack Kerouac’s On the Road. Kesey and the Pranksters intended to make a documentary about their trip, but the 16mm footage was never collated until now, with the release of Alex Gibney’s Magic Trip (2011).

Gibney is most famous for his 2005 Oscar-winning documentary Enron: The Smartest Guys in the Room and Client 9: The Rise and Fall of Eliot Spitzer (2010). Overtly political, yet far from an angry documentarian like Michael Moore, Gibney remains firmly away from the camera throughout his latest effort, preferring to use generic documentary conventions like  narration (from the fantastic Stanley Tucci), voiceovers and interviews to tell his story. For Magic Trip, all the material to tell the story had been assembled for some time – for years, the rolls of 16mm film were put into a vault until Gibney and his colleague Alison Ellwood came to restore the footage.

The whole essence of the cross-country trip stems from a post-1963 funk that the author Ken Kesey had found himself in following the assassination of President John F. Kennedy in November of that year, with Kesey falling upon an idea to drive cross-country in a bus with friends and aim for the World Fair. 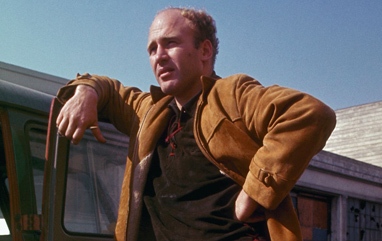 The film uses archive interviews with those involved reflecting upon their trip as they reminisce and view the footage for the first time in years. Instead of a narrator, Gibney uses the actual passengers to tell the story and paint the picture along with the masses of visual evidence.

Aside from being a solid documentary about the craziest bus ride that has perhaps ever taken place, Magic Trip is also a potted history of the use of recreational drug use. The film also captures a number of other new movements, including the rise of feminism and the rumblings of the Civil Rights Movement as Dr. Martin Luther King made his speech in Selma.

At times, the film’s comedy can be a little forced as the group having lived, driven and slept together for so long do struggle for entertainment purposes. Cassady becomes the entertainment chair of the group, and at times the joke falls on deaf ears. Yet this criticism is itself a minor one, as Magic Trip is less about the destination and more about the creation of friendships and lifelong bonds between people who may not ordinarily have been grouped together. Gibney’s latest stands up as a vital document of the counter-culture movements within 1960s America.

Magic Trip is released in UK cinemas from 18 November and will be available on DVD and Blu-ray from 28 November.