Sallie Aprahamian’s Broken Lines (2008) – starring Paul Bettany and Olivia Williams – was screened earlier this year as part of the London Jewish Film Festival and is now available to own on DVD and Blu-ray. Set it multi-cultural North London, the plot revolves around two sets of couples each coming to terms with personal tragedies including Jake (Dan Fredenburgh), a developer who has recently lost his father and by chance develops a relationship with local waitress, B (Doraly Rosa).

B is equalling struggling as she cares for her former boxer boyfriend Chester (Bettany), who is suffering from a debilitating illness and failing to come to terms with his new life. As Jake and B’s relationship grows it becomes apparent that they must choose whether they want to be with each other or remain in their unhappy lives. Whilst Broken Lines shines in occasional moments, Aprahamian’s film is problematic hugely overall. Despite an intriguing premise, most of the characters fail to captivate – the only exception to the poor character development being Bettany’s role as Chester. 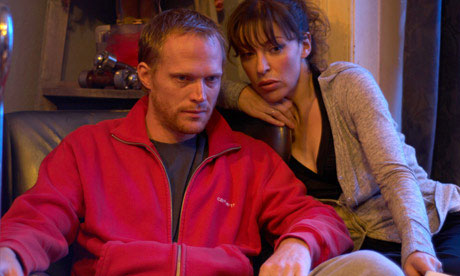 Bettany’s portrayal of a once physically strong man, coming to terms with being robbed of what he sees as his masculinity, is truly remarkable and the only real highlight of the film. Bettany’s screen time is disappointingly brief, with the main focus of the plot falling on Rosa and Fredenburgh. Whilst both provide good performances they are by no means remarkable. Sadly, there is also far too little screen time for Olivia Williams, whose character is a non-event.

London, which is very much a character of the film, is presented as gloomy and depressing throughout. Described at one point as a ‘prison’, it never feels so – like so many of the characters, it is immaturely portrayed. There is also an interesting haunted feel to the film, but it is too incoherent to become truly captivating. The melancholic elements of the film are reminiscent of Mike Leigh’s most recent work Another Year (2010), but without any sense of relief, comic or otherwise.

In the end, we never feel invested in Broken Lines’ characters (except Bettany’s) enough to care about what happens to them. The overall pace is too slow and fragmented to work well, most of which can be put down to colourless direction and an inadequate screenplay.