Whilst there is much to be enjoyed in Johnny Daukes’ debut feature Acts of Godfrey (2012), including the poetic musings of Simon Callow and a suitably dark and comedic performance by comedian Harry Enfield, the film ultimately fails to deliver on its substantial promise due to a distinct lack of humour and a detectable air of pomposity.

Set within a country hotel over a period of 24-hours at a conference titled ‘Win Only Win’, we are introduced to Vic (Iain Robertson), a man of morals who becomes the pawn to the seemingly omnipotent Godfrey (Callow). Deciding that Vic’s life must change for the better, Godfrey sets about improving Vic’s romantic fortunes in a game that will not only find him love, but also expose the sinister plans of other members of the conference who each carry with them a number of dark secrets. 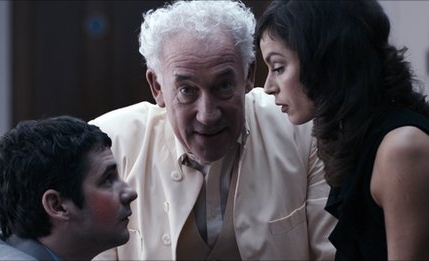 The entire script is in iambic pentameter giving a Shakespearean quality to the film, with the characters broadly sketched as modern day equivalents of characters from Chaucer’s The Canterbury Tales. However, the central problem with such a screenplay is that often the rhyme scheme – whilst occasionally funny – feels forced.

Acts of Godfrey’s plot – for the most part – is relatively gripping and trundles along nicely. Yet the commentary on society’s ills – essentially stating that everyone, in some shape or form, is corrupt, be it in terms of materialism, criminality or sexual deviancy – still manages to feel heavy handed in its approach.

Despite the numerous flaws of the film, the Miss Marple-like plot – sitting somewhere in between Cluedo and Guy Ritchie’s Lock, Stock and Two Smoking Barrels (1998) – does entertain, if not captivate. The cast play their parts well, hamming up the larger-than-life characters, with Callow in particular adding real zeal and relish to an excellent performance as Godfrey.

Sadly, Acts of Godfrey takes itself far too seriously in its social commentary and style, and if anything comes across as more than a little pompous – whilst you may not be bored, you probably won’t be entertained by Daukes’ debut.