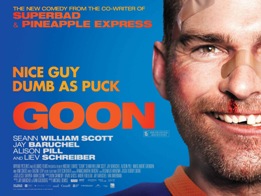 A great deal can be learned from looking at those involved in bringing hockey comedy Goon (2011) – starring American Pie’s Seann William Scott – to the big screen. Director Michael Dowse attempts to bring a creative touch to the film, yet writers Jay Baruchel (who also stars in the film as an irritating sports blogger) and Evan Goldberg (responsible for penning 2007’s Superbad) can only muster a cliché-ridden and tiresome sports drama storyline.

Goon tells the story of Doug Glatt (Scott), the black sheep of a family of doctors and lawyers, who works as a bouncer until he is picked up as the ‘goon’ (an enforcer responsible for deterring and responding to dirty or violent play by the opposition) for a local ice hockey team. After joining the team, Glatt and his compatriots rises through the league ranks to semi-pro where he rallies a group of underachieving players in the hope of victory. 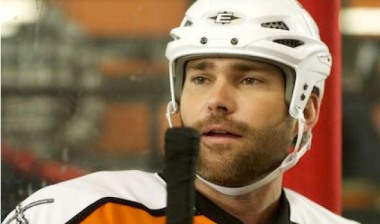 With the notable exception of last year’s highly entertaining baseball drama Moneyball starring Brad Pitt, sports films are frequently clichéd underdog stories. The ‘rise to victory’ theme is a tried-and-tested winner and can make for captivating cinema in the right hands – the problem with Goon is that it’s in the wrong hands.

The film revels in violence, displayed in highly visceral terms throughout with teeth bouncing off the ice and slow motion shots of bones breaking. Whilst justifiable violence in films is not a problem (and understandable given the context of a high contact sport such as hockey), Goon seems to focus on the brutality at the expense of more interesting elements of the story, all of which are left underdeveloped. The love story between Glatt and Eva (Alison Pill) appears out of place yet at times touching – albeit in a highly sentimental manner – but is sadly neglected in favour of more blood on the ice.

Scott handles his character well and the performance is one of the better of his career, but the character of Glatt lacks depth to begin with. Goon ultimately had substantial potential, but the result is a tiresome montage of violence peppered with clichéd sentiment, as unforgettable as it is irritating.