Michel Hazanavicius’ silent extravaganza The Artist (2011) will not only be topping many critics’ film of the year lists, but also looks set for major awards glory (after dominating the 2012 Golden Globe nominations) – and it’s easy to see why. Hazanavicius’ film is so much more than a simple homage to the silent era, encapsulating everything that is great about the cinematic art form, from high drama to note-perfect visual humour which demands (and deserves) comparison with the sublime musical classic Singin’ in the Rain (1952).

The hero of the piece is George Valentin (Jean Dujardin), a silent movie megastar whose very way of life is jeapordised by the coming of sound and consequent birth of the talkies. Dismissing the new technology as little more than a ridiculous fad, Valentin takes up a new role behind the camera as star/director of debut feature entitled ‘Tears of Love’, a romantic adventure set within the jungles of Africa.

Valentin’s directorial debut is a disastrous flop, failing to compete with the latest talkie hit ‘Beauty Spot’, starring rags-to-riches movie megastar (and George’s love interest) Peppy Miller (Bérénice Bejo). Bankrupt both financially and artistically, Our protagonist’s life effectively falls apart and he quickly descends into alcoholism and depression – but can George Valentin make a dramatic comeback from the pits of despair? 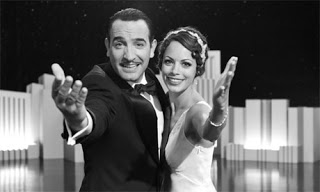 Whilst easily taking the crown as the most enjoyable film of 2011, The Artist also makes a compelling case for being one of the most faultless efforts of the year. Everything, from the performances through to the gorgeous period production design is executed with precision, “wiz pleasure” and – most importantly – with true heart. Hazanavicius is clearly a cinephile in the purest sense of the word, and his finished article – much like Martin Scorsese’s Hugo – positively glows with the light of cinematic adoration.

Dujardin is as charismatic a lead as Gene Kelly ever was, and Bejo is the perfect, irresistible foil for ageing megastar George Valentin. In support, John Goodman is perfectly cast as an old-school studio mogul, chomping at a cigar and barking orders in between takes, yet always conscious of giving his acting talent the praise and admiration they thrive upon. Also worthy of mention is the stunning performance of canine thespian Uggie the dog (as himself) – already an award-winner in his own right after scooping the coveted Palm Dog prize earlier this year.

Whilst perhaps not quite reaching the cinematic heights achieved this year by Lynne Ramsay’s We Need to Talk About Kevin or Tomas Alfredson’s Tinker Tailor Soldier Spy, The Artist stands tall as the most entertaining movie of 2011, and looks set to go head-to-head with Steven Spielberg’s epic War Horse (2011) for next year’s Best Picture Oscar at the 2012 Academy Awards.