About Schmidt (2002) and Sideways (2004) director Alexander Payne returns triumphantly after a seven-year hiatus with the wonderfully poignant, Hawaii-based comic-drama The Descendants (2011), starring Hollywood megastar George Clooney in what is arguably his most impressive role to date.

Matt King (Clooney) is a Honolulu-based lawyer struggling to come to terms with a boat accident involving his wife Elizabeth (Patricia Hastie) that leaves him in the role of full time parent to his two troubled daughters, a situation he is ill-prepared for. Matt also has control over his family’s extensive real estate in Hawaii (who are all urging him to sell their piece of paradise for development). When he later discovers his wife was having an affair – and with his relationship with his daughters in tatters – Matt sets off to confront the man who caused his wife to stray. 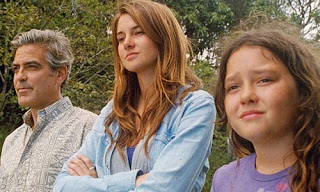 The Descendants is based on the successful novel of the same name by Kaui Hart Hemmings, which looks at small, intimate human stories – material that is absolutely perfect for a filmmaker like Payne. Payne does far more than simply adapt the novel – he brings out further vibrancy and sensitivity through the clever use of heartbreaking humour, most demonstrable in an early scene where King clownishly jogs to a friend’s house upon the discovery of his wife’s deceit, a moment as heart-rending as it is comical.

The luscious panoramas of luscious greens and vibrant yellows, beautifully captured by Phedon Papamichael’s exceptional cinematography, creates a magnificent backdrop to the drama at hand. Payne and Papamichael unmask Hawaii, revealing it to be both the familiar clichéd paradise, and paradoxically a place like any other where people work and deal with their family’s strife. The film is further complemented by a tremendously enjoyable ukulele-dominated soundtrack.

The Descendants features a number of tremendous performances from all members of the cast – Clooney of course, but there are also impressive performances from Amara Miller and Shailene Woodley who play Matt’s daughters Scottie and Alexandra. Both capture the emotional complexity of the situation bringing across vivid and accurate portrayals, accompanied by moments of that distinctive bittersweet humour Payne is known for. This is also true of the moments involving Matt and Sid, Alexandra’s surfer boyfriend, excellently played by Nick Krause who acts as the dumb/wise foil to the pent-up aggression of Matt.

With The Descendants (which has received five Oscar nominations including Best Picture and Best Director) Payne has created an incredibly moving, intimate, and comical film that still manages – in a humble sort of manner – to speak softly.