★★☆☆☆
Easily one of the strangest entries in the running for the Golden Bear at this year’s Berlin Film Festival, playful Indonesian director Edwin’s Postcards from the Zoo (Kebun Binatang, 2011) is a mawkish, frequently irksome (quirksome?) trinket of a movie that – frustratingly – shows fleeting moments of true potential. A true marmite film that will polarise audiences, Postcards from the Zoo looks set to reward few – and alienate most. The film’s plot (of what little plot there is) focuses upon Lana (Ladya Cheryl), a young girl abandoned in a Jakarta zoo as a child and subsequently raised on site by an amicable giraffe handler. 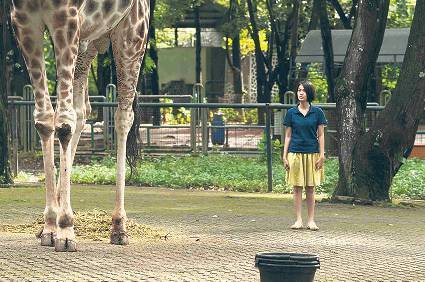 Motivated by relatively high aspirations of touching the belly of the the zoo’s lone giraffe, Lana’s humble existence is altered irrevocably by the arrival of an enigmatic local magician and the news that she must leave her home due to new government legislation – yet her longing to return remains.

The most instantly noticeable issue with Postcards from the Zoo is its dual lack of narrative coherency and motivation. Despite a visually-arresting opening – wherein we are introduced to an infant Lana as she calls out for her father after being abandoned at the zoo – the film’s endless series of short, often inter-related vignettes are very much a mixed bag. Most compelling of these are the adult Lana’s interactions with the zoo’s inhabitants, from the towering giraffe to hippos, leopards and pelicans. Less well-drawn are the actual human characters aside from our plucky protagonist, ranging from Lana’s seemingly mute, emotionless magician love interest to a cast of redundant zookeepers.

As Postcards from the Zoo draws to its conclusion (after a surprisingly drawn-out 95-minute runtime), the film’s tone shifts quite significantly from a slow, meditative – even spiritual – piece to a bawdy, mildly depressing exploration of Jakarta’s sex industry, which Lana sadly becomes enveloped by. Whatever good work Edwin does in the film’s first two thirds are immediately undone, and not even our protagonist’s achievement of a life time goal seems able to repair the damage already done to its sliver of a plot. Edwin’s latest is undeniably an acquired taste, which only the most fervent of the director’s fans may find palatable.