The idea that the works attributed to William Shakespeare were written by somebody else is an interesting historical conspiracy. The likes of Christopher Marlowe, Ben Jonson, Francis Bacon have all been suggested by various scholars and crackpots as being the real author of the great plays and poems, but it is the so-called ‘Oxfordian theory’ which proves the inspiration behind Roland Emmerich’s period drama Anonymous (2011).

Rhys Ifans plays Edward de Vere, 17th Earl of Oxford and Renaissance man who is introduced into the court of the young Elizabeth I (Joely Richardson), beginning a secretive, passionate relationship with the young queen. After having a secret baby together, de Vere secretly ghost writes plays using an illiterate drunken actor called Will Shakespeare as his stooge. Add a bit of murder and incest into the mix and you have all the ingredients of a script worthy of the Great Bard himself. Unfortunately, screenwriter John Orloff is not quite in the same league as Shakespeare, and disaster movie director Emmerich has, accidentally this time, delivered a distaste of a movie. 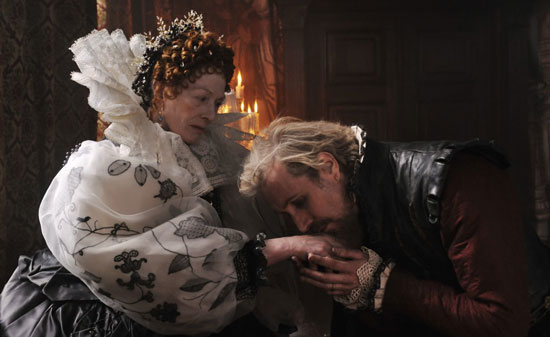 Aside from Ifans, whose turn as the stoic Earl is worthy of a better film, the rest of the cast deliver a master class in mediocrity. Vanessa Redgrave’s jittery, ageing queen and Rafe Spall’s irritating Shakespeare are the main offenders, and yet their performances have been lauded by some critics whose deference for Great British acting lineages seems to have had an affect on their judgement. As for Derek Jacobi’s present day opening narration, it’s so pompous and ridiculous that it verges on self-parody.

Of course, Orloff and Emmerich have to shoulder much of the blame. It’s easy to imagine that, when pitched, the premise for Anonymous sounded like a good idea. After all, the creators of 1998’s Shakespeare in Love took giant historical liberties and that made a mountain of money. However, the difference between Anonymous and Shakespeare in Love is that the latter was a light-hearted romantic comedy that never claimed to be based on fact – therefore, it’s historical accuracy was never an issue. Anonymous, on the other hand, takes itself far too seriously.

There is plenty of circumstantial evidence that supports the Oxfordian theory, but Emmerich’s overblown brand of cinema is badly suited to this kind of material. He loads Anonymous with too many far-fetched revelations and unless you have absolutely no knowledge of the period, you may will find the twists to be at best absurd, and at worst, downright insulting.