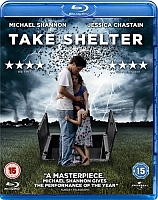 Following his assured 2007 debut Shotgun Stories, writer/director Jeff Nichols asserts himself as a major new voice in American cinema and with Take Shelter (2011) may have crafted his first masterpiece. Unfolding as a dark fable for our times, the film follows Michael Shannon’s Curtis as he begins to sense an impending disaster, plagued by visions of a cataclysmic storm and dreams of violence inflicted by his own family members.

Unbeknownst to his adoring wife (Jessica Chastain) Curtis uses money saved for his deaf daughter’s operation to enforce the beat-up tornado shelter in the back garden of their quaint Ohio home. Curtis is a man who finds his entire identity interrogated and who sees every semblance of security he has constructed collapse to the basest level of alpha male instinct. Michael Shannon imbues every crevice of the character’s life with history and experience, not ever letting Curtis’s more extreme behaviour define him. This role, alongside that in William Freidkin’s oft-maligned Bug (2006), confirms that there is no better actor working today. 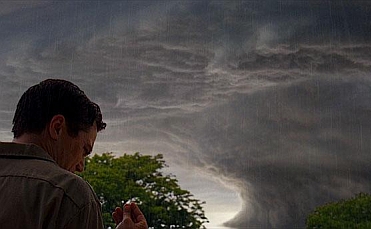 He is matched on every level by the wonderful and ubiquitous Chastain takes command of a potentially thankless role, completely selling the mutual love and respect that makes Curtis’s actions all the more unbearable to watch.

Despite the all-encompassing destruction prophesied, Take Shelter is a hugely claustrophobic portrait of a family trying to cling together and adapt under immense pressure and succeeds best as such. Nichol’s indulges in a number of CGI enhanced set-pieces that, at their best, leave you forgetting to breathe, and at worst feel like they’ve been scooped from the cutting room floor of another film. However, by this point Nichol’s has lulled you into such a trance-like state that you will forgive him a few misjudged seconds.

Special mention should also go to David Wingo’s score, one of the only in recent memory that can truly be described as ‘haunting’ and easily the finest of 2011.

Take Shelter marks a near-perfect moment in the evolution of some of the finest artists working today, a film that makes an enticing promise for future of American cinema.