Film Review: ‘Wrath of the Titans’

Louis Leterrier’s Clash of the Titans (2010) was a bloated, passionless picture let down by a poor 3D retro-fit, uninspired direction and ridiculous dialogue. Innocent audiences stumbled into cinemas believing they were about to experience a sweeping mythological epic, but after the credits rolled hordes of them hit the forums to forewarn others and express their disappointment. Yet somehow Clash made nearly $500 million at the box office – hence a hastily cobbled-together sequel in the form of Wrath of the Titans (2012).

This time around, Battle Los Angles (2011) director Jonathan Liebesman takes the helm, and although he lacks pedigree, it’s obvious from the first battle sequence that Wrath is a marked improvement on its predecessor. The much-lauded special effects still don’t quite astound, only the coldest of souls will be able to deflect Lieberman’s adrenaline-tipped arrows as we weave from monstrous battle to battle. 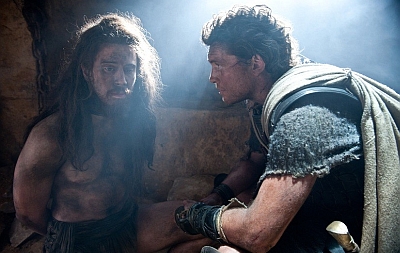 Liebesman’s sequel is fast, furious throughout, and with a run-time of 99 minutes you won’t get a chance to pause for thought – which probably for the best when you consider Wrath’s numerous, near-terminal flaws. Let’s ignore the tacked-on-3D which is as pointless as always, and in no way enhances the experience, and instead concentrate on the script. It doesn’t fill your heart with hope when you know that the two of the four credited writers of the screenplay were responsible for the dismal Green Lantern (2011) and Red Riding Hood (2011), yet Greg Berlanti and David Johnson have managed to descend even deeper into dialogue hell.

Nobody within the big-name cast is on form here. Sam Worthington (Perseus) might have the acting range of a chair leg, but even old pros like Liam Neeson (Zeus) and Ralph Fiennes (Hades) struggle with their clunky lines. Rosamund Pike’s Andromeda is great to look at but surplus to requirements, and only Bill Nighy’s bizarre turn as former God Hephaestus stands out from the crowd.
Still, for all it’s many faults Wrath of the Titans is an enjoyable ride, and no matter how many critics tear it to pieces the kids, teenagers and blockbuster-guzzlers are going to be purchasing tickets in their droves. This is not high art – and who in the right mind would it expect it to be – so better to turn your brain off at the door, chew on some popcorn and let the sweet waves of blissful ignorance wash over you.