★★★☆☆
From acclaimed British filmmaker John Akomfrah comes The Nine Muses (2010), a mesmerising hybrid of documentary, installation piece and visual essay that never quite feels as strong as the sum of its parts. Utilising Homeric epic The Odyssey as an anchor-of-sorts, Akomfrah seeks to parallel the myth of lost hero Odysseus with everything from Britain’s post-war mass immigration to the Alaskan glacial wastes, to varying degrees of success. 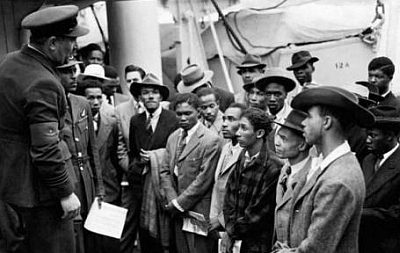 Pivotal to the arguable success of The Nine Muses is its fine selection of archived footage of 1960s Britain, focusing upon the arrival of immigrants from Africa, India and the Caribbean to UK shores in search of a more prosperous future. The Ghana-born, London-raised Akomfrah doesn’t shy away from depicting the great hardship that befell many new arrivals, their initial enthusiasm chipped away by a lack of opportunities and substantial, unprovoked racial animosity, and their Odysseus-like struggle to rediscover their home is nothing if not compelling.

Less engaging are the odd occasional locked-off shot of Alaskan glaciers that intersperse Akomfrah’s experimental effort. Though undeniably crisp and aesthetically pleasing, the only meaning that could be attributed to them in the context of the film would be that they serve as a visual metaphor of alienation and isolation – yet even this reading would be tenuous at best. It’s at such moments that a viewer may be tempted to question Akomfrah’s pretensions, and were it not for the aforementioned archive footage, The Nine Muses could well have been rendered almost entirely inaccessible to the majority of audiences.

As it stands, Akomfrah’s deeply personal AV cocktail just about proves palatable thanks in no small part to some well-selected textual references and a rousing, eclectic score featuring (amongst others) Wagner, Schubert, the Gundecha Brothers and Leontyne Price. The Nine Muses will likely inflame and bemuse in equal measure, but it’s also undeniably one of the most unique films released this year.