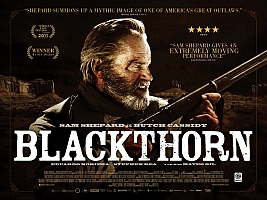 There is a great deal of charm to be found in Spanish director Mateo Gil’s Blackthorn (2011), a majestically-shot, well-performed western starring Sam Shepard (The Assassination of Jesse James by the Coward Robert Ford [2007]) and Eduardo Noriega (Open Your Eyes [1997]) that revisits the legend of Butch Cassidy.

Devoid of the camp humour of George Roy Hill’s Butch Cassidy and the Sundance Kid (1969), Gil’s effort revolves around the hypothesis that Cassidy (Shepard) didn’t die at San Vicente, Bolivia, but survived to retire in the same country as a farmer under the alias James Blackthorn. Pining to return to his home in North America, Blackthorn decides to cash in his earnings and head north. As he sets out, he encounters the young robber Eduardo (Noriega) who draws Blackthorn into his old ways with the promise of a share in his hidden stash, providing he help him evade both the law and a group of bounty hunters. 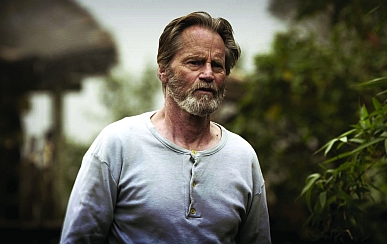 Blackthorn’s narrative moves along at a comfortable and entertaining pace, but ultimately the most captivating aspect of this film has to be the backdrop of Bolivia, which beautifully captures the dramatic mountain ranges and expansive salt flats. The country serves as a wonderfully dramatic contrasting canvas to the personal tale of one man’s belief in friendship, as he also recollects his past actions – there are frequent flashbacks to key moments in the life of Cassidy and the Sundance Kid, intended to give the audience an insight into Blackthorn’s motivations.

Admittedly, these scenes, whilst key to Blackthorn, sometimes fail to capture a real sense of nostalgia and suffer the same continuity problems as the central plot. These mistakes don’t destroy the overall feel of the film but they happen often enough to frequently break the power of some scenarios, in particular a death scene featuring a secondary character who is both buried then rolled into a river two minutes later.

Shepard gives an extremely moving performance as Cassidy/Blackthorn, expertly balancing the traditional romanticism of life in the Old West (and the Old South) with a believable portrayal of an old man yearning to return home. Noriega is less convincing as Eduardo, but with a supporting cast that includes the highly talented and under-rated Stephen Rea, western fans will undoubtedly be entertained by Blackthorn’s nostalgic tone and glorious, at times other-worldly Bolivian backdrop.