Ever since The Blair Witch Project (1999) electrified a staid horror landscape, the found footage aesthetic has become a staple of modern genre filmmaking. The success of 28-year-old Josh Trank’s Chronicle (2012) may mean the trend will continue, if only because of its box office performance. Yet the format – inviting us to believe that we’re watching a raw, unedited archive of events – seems in this case more contrived than ever, serving no other purpose other than to leap ungraciously onto the bandwagon.

Unlike Blair Witch or Matt Reeves’ 2008 monster flick Cloverfield – in which title cards hint at the background behind the how the footage is found – Chronicle’s context is slim. Unlike those films, Trank’s working philosophy is that any camera – strangers’ cameras, mobile phones, CCTV (all suspiciously in high definition) – is game. While this allows for more spatial freedom, it becomes a distraction as you quickly find yourself playing a guessing game of ‘Whose Lens is it Anyway?’ At the dramatic final climax, the concept is all but dropped, in the hope that you won’t notice amongst all the explosions. 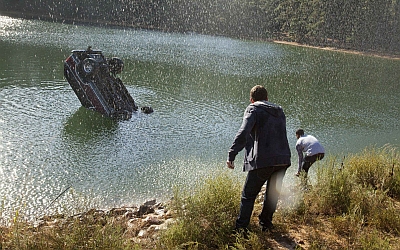 It’s a shame that technique becomes such an albatross, because beneath the pointlessly hip veneer, Chronicle is actually a pretty decent sci-fi romp with a solid script, a strong cast of unknowns and an intriguing premise. Andrew (Dane DeHann) is an introverted and downtrodden teenager who, along with cousin Matt (Alex Russell) and his friend Steve (Michael B. Jordan), happens upon a mysterious glowing object in a hole in the ground, which gives them telekinetic powers.

At first they can only move small objects with the power of their mind, but before long the trio are shunting parked cars and flying, Superman-style. The teenage superheroes of Chronicle aren’t interested in fighting crime or protecting the American way of life, but instead play pranks on unsuspecting children, perform magic tricks for the popularity of their classmates and ultimately follow more rather ignoble pursuits. Telekinesis and hormonal angst, it seems, are a potent and volatile mix.

There are some visceral and thrilling action set-pieces – belying the film’s relatively measly $15 million budget – which build to a rousing edge-of-your-seat climax. In addition, amidst all of the excitement Chronicle has a surprising amount to say about the adolescent experience. If Trank hadn’t wasted time trying to make it look like it was shot on a cheap Handycam, this could have been something outstanding.