Prolific Japanese cult director Takashi Miike swiftly follows up last year’s blood-drenched 13 Assassins (2010) with yet another period remake in the form of Hara-Kiri: Death of a Samurai (2011). Ditching its vaguely unnecessary 3D element for this home release, Hara-Kiri remains one of Miike’s most aesthetically-pleasing film, and also perhaps his most under-stated despite several depictions of seppuku (ritual suicide).

Taking its cues from Masaki Kobayashi’s 1962 film Harakiri, Miike’s latest follows the tragic tale of poverty-stricken samurai Hanshiro Tsukumo (Ebizo Ichikawa) as he seeks permission to commit ritual suicide in the hallowed courtyard of the House of Li, under the watchful eye of Lord Kageyu Saito. Kageyu appears unconvinced of Hanshiro’s true motives following a recent spate of ‘suicide bluffs’ (wherein downcast samurai come to beg for money under the guise of seppuku), going as far to recall the unfortunate fate of the last con-artist to darken his door. However, it becomes apparent that Hanshiro may have more in common with Kageyu’s previous visitor than initially appears. 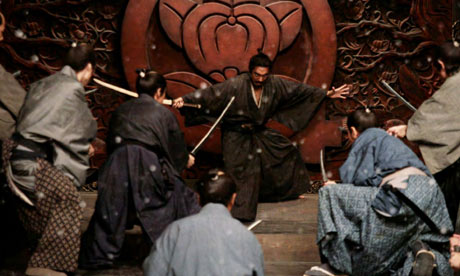 Despite its gaudy box art, Hara-Kiri is very much a tempered, slow-burning story of coolly-served vengeance, with a pervading melancholic tone winning over clashing swords and severed limbs. Set during a period of relative peace in Feudal Japan, samurai struggle to make ends meet due to a lack of conflict. Hanshiro himself has long been devoted to crafting intricate paper umbrellas for local merchants, whilst also raising his young daughter and adopted son Motome (Eita). It is the birth of his grandson Kingo that finally pushes the family beneath the poverty line, with heart-breaking consequences.

Hara-Kiri’s sedate pace and cinematography is unlikely to be to everyone’s pace, and with the exception of its period setting, Miike’s latest shares little stylistically in common with the aforementioned 13 Assassins. What’s more, its largely debatable as to whether a remake of Kobayashi’s Harakiri – 3D or otherwise – is truly necessary. However, such qualms aside, Hara-Kiri: Death of a Samurai remains a worthwhile addition to not only Miike’s body of work, but samurai cinema as a whole.