Long has esteemed character actor Johnny Depp been large-haired filmmaker Tim Burton’s muse for the director’s brooding visions, with many of those team-ups little more than tinkering with already established characters. Predictably, Burton and Depp’s latest outing, the horror-comedy Dark Shadows (2012) – their eighth collaboration together – doesn’t even try to buck that trend.

Based on the cult US TV show of the same name, the film sees 18th century lothario Barnabas Collins (Depp) turned into a vampire and buried alive after breaking the heart of evil witch Angelique Bouchard (Eva Green). Nearly two centuries later, Barnabas is accidentally freed from his tomb and, returning to his hometown of Collinwood, finds the dysfunctional remnants of the Collins family in disarray. Intent on restoring his family,s fishing business to its former glory, he is met with opposition in the form of the spurned witch. 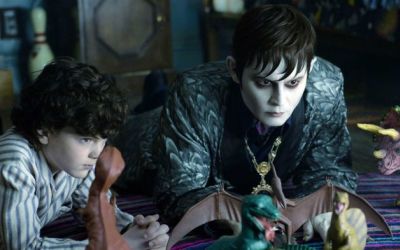 If nothing else, Dark Shadows looks fantastic. The cinematography and costume design in particular are infallible – very much in line with Burton’s trademark Gothic style – and the attention to detail is striking. Unfortunately, the same cannot be said of the screenplay, which hits its low point in the over-long second act. The aforementioned main narrative suffers heavily from a lack of tension as a string of subplots – including an analysis of a father-son relationship, and Barnabas’ pursuit of what may or may not be the reincarnation of his true love – are given precedence. To that end, characters are brought in and out as a matter of convenience to the story as opposed to a natural progression of plot strands.

These issues may not have been so glaring had Dark Shadows been as funny as it had intended, but sadly this is not always the case. The fish-out-of-water shtick forms the basis for many humorous lines, giving Depp plenty of ‘opportune moments’ to display his natural charisma, complete with the deadpan delivery previously glimpsed in the Pirates of the Caribbean franchise. However, this can only get you so far, and whilst the gimmick works a few times, Burton doesn’t help himself by repeating the same trick over and over again, only with less imagination.

Still, Dark Shadows is certainly not unwatchable, and it undeniably benefits from an excellent supporting cast; Depp shares fantastic chemistry with Green, who clearly enjoyed playing the voluptuous and volatile witch. There’s also fun to be had with Michelle Pfeiffer’s shotgun-wielding Elizabeth Collins, who always has the best interests of her family at heart. Chloe Grace Moretz and Jackie Earle Haley both make humorous contributions, but could have done with more screen time. Burton regular and live-next-door girlfriend Helena Bonham Carter is also enjoyable watch as an alcoholic psychiatrist eager to unlock the secrets of immortality.

It’s just unfortunate that Dark Shadows’ impressive cast is not backed up with tighter material. With hints towards a possible sequel suggested, whether Burton has earned the right to make it after this average effort is definitely up for debate.