A Fantastic Fear of Everything (2012) joins a growing list of disappointing Simon Pegg projects that lack the charm and wit of his early endeavours (with Edgar Wright) such as cult series Spaced and big screen outings Shaun of The Dead (2004) and Hot Fuzz (2007). This surreal comedy, written and directed by Crispin Mills and Chris Hopewell, contains elements of Pegg’s own distinctive style of humour, but is ultimately unsuccessful in its attempts to rekindle such past glories.

Jack (Pegg) is a children’s author who has turned his hand to crime fiction, specialising in macabre and disturbing stories about serial killers set in the Victorian London. His research has taken its toll, resulting in a paranoid delusion that almost everyone is out to kill him. After a meeting with his agent (an excellent acid-tipped performance by Claire Higgins), Jack discovers a Hollywood exec is interested in his work. In order to make it to the meeting, Jack must confront his numerous fears, which means not just leaving his house but also facing his biggest phobia of all – the dreaded launderette. 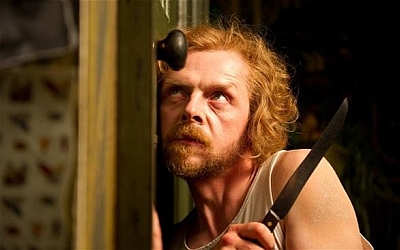 The most entertaining aspect of this generally disappointing comedy is to be found in the production design, which submerges the viewer in an unreal world that crosses 1970s London with a nightmarish fairytale fantasy. Relatively few sets are used, imbuing the claustrophobic atmosphere felt by Jack in an enjoyably exaggerated way. Also enjoyable are several outlandish animation cut-scenes relating to Jack’s children’s book. These have been given an adult twist, depicting a deranged hedgehog in a tumble-down universe, recalling the 1960s stop-motion classics Bagpuss and The Wombles.

Sadly, these two elements, however impressive, are let down by A Fantastic Fear of Everything’s hit-and-miss comedy. Mills and Hopewell have failed to recapture the surreal comedy that Pegg can do so well, with the best joke in the film at the expense of psychoanalysis – featuring Jack’s pirate-costumed psychiatrist Dr. Friedkin (Paul Freeman). Essentially, the problem with this ramshackle comedy is that it appeals to a very small audience. Most of the jokes involve London clichés such as the dangerous reputation of Brixton (not totally endorsed by this reviewer) and the inadequacy of Community Support Officers. This may well just about work for British audiences, but it is hard to see how it will translate for the American or European markets.

Pegg fans may well feel slightly cheated by A Fantastic Fear Of Everything, which puts style over substance and supplies only a few moments capable of evoking genuine audible chuckles. Mills and Hopewell’s latest endeavour is really nothing more than a hybrid blend of Bagpuss with Spaced, but sadly lacking the full charm of either cult classic.