Adapting Christopher Priest’s novel concerning duelling magicians in Victorian London into 2006’s The Prestige not only allowed Chris Nolan to make his first British-set film since The Following (1998) but gave he and his brother Jonathan the chance to return to the kind of non-linear storytelling that made Memento (2000) so special.

Sat in a cell convicted of the murder of Robert Angier (Hugh Jackman), Alfred Borden (Christian Bale) leafs through the dead man’s diary. In his own entries Angier recalls reading Borden’s own journal whilst travelling to Colorado desperate to learn how the illusionist manages his greatest trick; The Transported Man. Having met one another working as plants for a stage magician whose tricks were designed and managed by Cutter (Michael Caine), tragedy struck when one such trick went horribly wrong – possibly due to Borden – and Angier’s wife drowned. 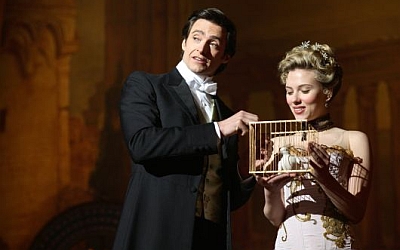 As the two men subsequently attempted to leave their mark on the world of magic, their mutual loathing escalated into a dangerous rivalry especially once the beautiful Olivia (Scarlett Johansson) entered their lives. Ultimately showing that dedication and sacrifice are the keys to being a great magician, it is interesting to consider that the movie – intentionally or no – posits the idea that the illusionist and filmmaker are almost synonymous, especially with the parts of the magic trick being so close in structure to the three acts of a screenplay.

The Prestige does playfully tease the audience; from its strange opening shot and the line “Are you watching closely?” he is challenging us to beat the movie to the answer and hoping to dupe us with misdirection. Although some have found the plot to have an excess of twists, as in Memento – still Nolan’s masterpiece – there are not actually that many; the fractured chronology in fact creates the illusion that there are. How the two performers are able to pull off their respective transported man tricks is the mystery and is actually easy to see if you want to but, as Cutter points out, “you don’t really want to know”.

The performances are all strong including the supporting players like David Bowie, Andy Serkis, and Rebecca Hall who stands out as Borden’s wife; as haunted by his mood swings and secrecy as Angier is obsessed with his methods. Combining these with a wonderfully-realised Victorian London and fantastic editing, The Prestige is endlessly re-watchable. With more of the countless clues noticed in every viewing, even once you are aware of his method Nolan’s skill in pulling it off remains admirable in what is probably his most under-appreciated film.