Delicacy (2011) offers the sort of fluffy, predictable cupcake-romance that we’ve come to expect from Audrey Tautou’s recent chosen projects. Officially the tale of a tragic young widow, the story is weirdly dismissive of her turmoil and much less emotionally impacting than something such as 2007’s P.S. I Love You, which features a similar storyline with actual heart and a sense of valid mourning for one’s loss.

Nathalie’s (Tautou) suffering seems quite momentary and simply the only catalyst for the new romance she embarks upon – nothing else about her persona is build upon from opening scene to closing scene – only that have has pretty dire, snobbish friends who can’t handle her lower-class new Swedish boyfriend Markus (François Damiens) – someone who works below her at her depressingly chauvinist-led, cartoon-like Parisian office (all the men are fat and balding, their female secretaries young, buxom and spilling out of their blouses). 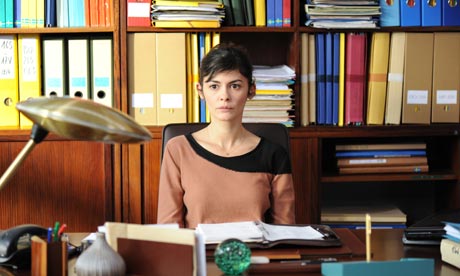 Adding to the female subjectivity – which doesn’t really seem to conclude anywhere – is the complication of Tautou’s predatory married boss, insensitive to her loss and latched to the idea of making his sweet doe-eyed employee his own. Other than the small audience satisfaction of observing Tautou tell him exactly how much she isn’t attracted to him, it’s unclear what real drama this scenario poses other than the quirkiness of her choosing an offbeat Swede over her slick Parisian boss.

Like Disney’s Lady and the Tramp (1955), the petite bourgeoisie of Tautou’s existence means she quite literally treats her new man like a stray dog, and is in control of the burgeoning relationship at all times, one which though convincing and sweet at times, seems fast, forced and unbelievably unbalanced. At times you even feel a sense of pity for the funny old Swede, who promptly sprints off after telling his new interest that he’s falling in love, and possesses of sort of morose and lonely nature that seems to have been waiting all his life for someone like the picture perfect Tautou to come along.

That said, Delicacy is a faultlessly shot piece of work, celebrating the French star’s inescapable captivating beauty as she meanders down busy streets and is constantly made be subject of admirers’ affections. It’s just a pity that more was not explored in terms of grief and real vulnerability.