Julien Leclercq’s The Assault (2010) documents the hijacking of Air France, Flight 8969, bound for Paris on Christmas Eve of 1994. Sadly, in its attempt to deliver a serious film about the harrowing events of that day, it unfortunately manages to lose itself amidst loose back stories and, sometimes, unnecessary camerawork.

Four heavily armed terrorists from a group known as the ‘Algerian Armed Islamic Group’ hop on board Flight 8969 and waste no time in making their presence known, leaving the 227 passengers on board destined for tragedy. Tireless negotiations ensue – mostly regarding the removal of a set of steps from the side of the plane- and eventually the flight takes off, heading for new destination Marseille. Here, a host of SWAT officers, an overly ambitious French Interior Ministry worker and the determined jihadist leading the four men on board the plane play a game of wits as the drama unfolds piece-by-piece. 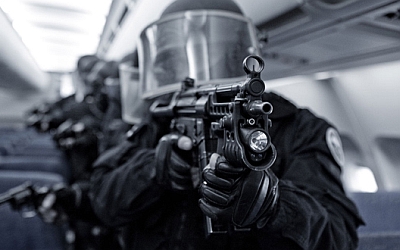 Whilst The Assault respectfully depicts the unfortunate and tragic events of that day, it’s apparent that there isn’t enough of a story to make it a solid film. The attempts at portraying the back-stories of tough SWAT officer and father, Thierry (Vincent Elbaz), with a wife held on tenterhooks throughout the arising chaos, make the film a little uneven and disjointed, detracting from the film’s attempts to convey the tension of the horrific events taking place. In a similar fashion, the depiction of Carole (Mélanie Bernier), if anything suggests another message being forced in by the filmmakers, about the dangers of career hungry politicians and government employees in times of crisis.

Nonetheless, the film does offer some serious saving graces in its visual tone, with some taut and stylish camerawork, and stand-out performances from Elbaz as Thierry, Marie Guillard as his wife, Claire and Aymen Saïdi as terrorist Yahia. The visual element combined with their gripping delivery make for some memorable moments, and had The Assault focused in more tightly on the balance between the soft moments of love between Thierry and Claire, it may have been a far more attention-grabbing movie.