The Talking Heads’ 1983 single This Must Be the Place provides the inspiration for Paolo Sorrentino’s English language directorial debut This Must Be the Place (2010), a glam rock, Nazi-hunting road movie starring Academy Award winner Sean Penn. This is a film that is interested in identity, and especially in the criteria we use to assess ourselves and others. Protagonist Cheyenne (Penn) asserts early on, “You don’t judge people based on the music that they listen to”, though when challenged, he cannot determine any alternative.

Penn plays ageing rock star Cheyenne as a middle-aged teenager, his face eternally smothered in white make-up, red lipstick and a gloomy, listless expression, his hair up in a dark cloud a la The Cure’s Robert Smith. He talks in a hushed, tremulous whisper, and occasionally drifts into silence, mid-sentence. Cheyenne, living in self-imposed exile in Dublin, receives news that his father is dying, and determines to cross the Atlantic at last to see him. When he finally arrives, the old man has already died, leaving Cheyenne with an unusual mission: to find the Nazi officer who humiliated him in Auschwitz. 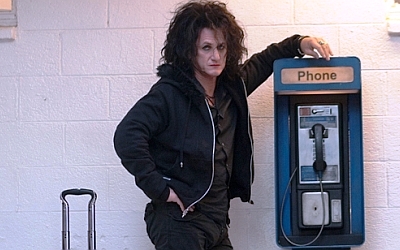 Despite its seemingly strange narrative, This Must Be the Place has a dreamlike, easygoing atmosphere, and is full of little moments that will be found enchanting by some and infuriating by others. Penn’s performance is unorthodox, and will doubtless put off plenty of viewers, but if you go with that then the rest of the film should prove more than engaging enough.

Sorrentino has not only a remarkable knack for handling tone (especially in a film that treads such a thin line between quirk and farce), but a graceful, sweeping visual style. A few moments in this film unfold not because the story demands it, but rather because they feel right: a rejected young man steps away from the camera and is borne away on an escalator; an unattended car bursts into flames.

Ultimately, it’s the very waywardness of this road movie that is both one of its strengths and one of its weaknesses. Some of those little non sequiturs do seem to be little more than throwaway sight gags. Some of the character arc seems a little forced in the final moments – yet these are minor issues. This Must Be the Place is an intriguing, enjoyable watch, packed with great performances, from Frances McDormand as Cheyenne’s wife to a brilliant one-scene cameo by Harry Dean Stanton.

Win a copy of Paolo Sorrentino’s This Must Be the Place on Blu-ray with our latest competition. Follow the link to enter.