The final completed picture by the great enigmatic raconteur Orson Welles, F for Fake (1973) is a rarely seen but essential exploration of the world of art forgery, cinematic illusion and good old-fashioned fraud. Yet the film’s conception was just as strange and mysterious as its content. Director François Reichenbach made a documentary about the famous Picasso forger Elmyr de Hory and his biographer Clifford Irving, but for some unknown reason turned his footage over to Welles who shot additional material.

During the editing process it was revealed that Irving’s supposedly authorised biography of reclusive eccentric Howard Hughes was itself a fabrication. Welles added more footage and after a year of editing F for Fake was finally complete. How much of that origin tale is true is open to speculation, but then truth – according to Welles – is a flexible concept. 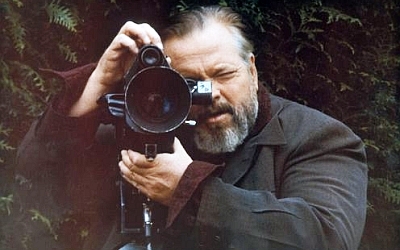 During the opening sequence shot in a train station, Welles stands in front of a white backdrop and when the screen is removed, he steps out onto a studio sound-stage. On the one hand, Welles is the magician revealing the tricks of his trade but rather than being a cynical attempt to shatter the cinematic illusion, F for Fake is a celebration of the power of the medium and its ability to manipulate reality.

Aside from its technical wizardry and myth-exploding, the film is important because it gives us an invaluable insight into the artistic philosophy of one of the most influential figures in cinema history, Welles himself. Even through the smoke and mirrors, it’s clear that this flawed genius is attempting to make a personal statement about the purpose of art and its role/his own role in the grand scheme of things.

This is the work of an old man facing his own mortality and wondering if his contribution to the world will stand the test of time. Some may regard that as self-indulgence, and for many viewers the film won’t strike a chord, but if you’re in any way interested in the man and his medium, F for Fake is a genuine masterpiece.